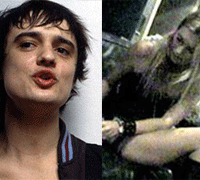 AFR reports that British supermodel and on-screen consumer of Peruvian marching powder Kate Moss is pregnant by smack-shooting rehab-hopping Babyshambles frontman Pete Doherty. Rumors began to fly that the two would also be marrying soon when it was reported that the couple was spotted "shopping for a big rock" in the alleyways of London's tony Knightsbridge neighborhood.
When confronted, Doherty claimed he was simply trying to give Moss the "white wedding she often grinds her teeth and talks about." The couple will reportedly honeymoon in either Colombia or Afghanistan depending on laxity of local enforcement and seasonal harvest purity.
Posted by Adam Tschorn at 1:59 PM