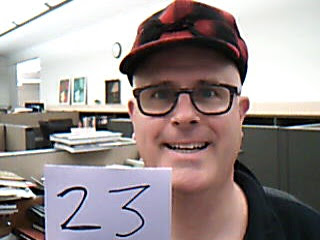 This is a special hat indeed -- and not just because the description at Stormy Kromer's website describes it as a "heavy-duty head furnace," but also because it marks the first hat in the Noelle series, named in honor of  my co-worker Noelle Carter who has graciously loaned her own extensive and eclectic collection of head gear (two bags full!) to the cause. (As I've already mentioned, I've got hats -- but nowhere near enough to close out Project Cubbins without some loaners. I cribbed my first lid from Dan Fredman on Sunday.)

Look for more from her collection  for the NC Series in the coming days -- except for her turkey hat -- because I've got the same one and I'm hoping we'll BOTH wear them for a Project Cubbins entry closer to Thanksgiving.

Noelle, I tip my head furnace to you.