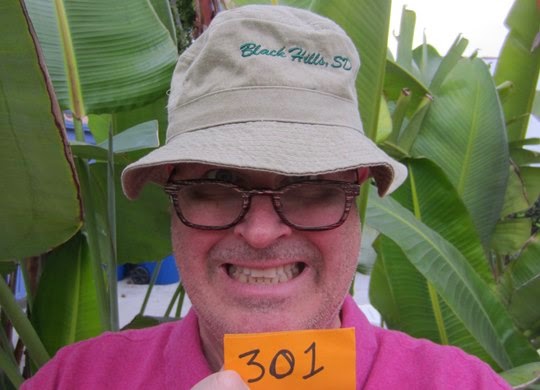 Day 301 / Hat 301: Olive drab cotton bucket hat with green embroidery on front that reads: "Black Hills, SD." Interior is devoid of any manufacturer or content tag but does contain the name "McClary" hand-written on the interior sweatband.

That would clue you in (if you hadn't guessed already) that this lid was plucked from the seemingly never-ending SJTBOH. I'm going to hazard a guess that it was originally procured on the same visit west that resulted in PC 283.

In addition to the hat-tip to sister Sue, it is incumbent upon me to point out that with the Project rounding the third hundred of five, if anyone has a hat to throw into the ring (so to speak) there are only 199 more chances left to do your part.

A: One man's homage to Dr. Seuss and his second book, "The 500 Hats of Bartholemew Cubbins," which is celebrating the 75th anniversary of its publication in 2013, Project Cubbins is an attempt to document the wearing of a different hat or piece of headgear every day for 500 consecutive days. No do-aheads, no banking of hats, no retroactive entries. PC started on May 27, 2013 with Hat 1. Got hats? If you loan 'em, you'll get e'm back safe and sound!
Posted by Adam Tschorn at 6:26 PM