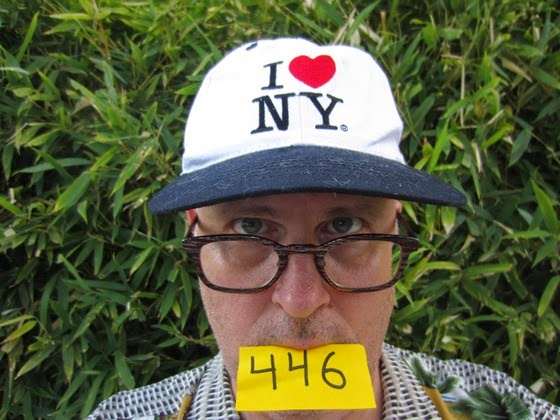 Plucked at random from the Bride's headgear archive she purchased this when she was in the city during 9/11. She'd gone there to cover the biannual fashion shows and ended up covering the aftermath of the horrible, horrible attacks on the Word Trade Center for something like a week (it felt like much longer).

At first blush it might seem frivolous or cavalier to make such a purchase at such a time but of it the Bride says: "There was this incredible emotional groundswell right afterward and everybody was showing their support in whatever way they could." And, if there's one thing the Bride knows, it's the power of patriotic shopping.

You may or not may know (I did, then I forgot then remembered as soon as I started searching the interwebs) that the "I Love New York" logo was designed by Milton Glaser in 1977. It was first used to promote tourism in NYC and later the entire state. (The song "I Love New York" is the state song, BTW.)

Oh, and if you care to make the little ♥ symbol and you're using a keyboard with the big old numeric keypad over on the right, just hold down the ALT key and hit the 3 key on that aforementioned numeric keypad.

Related:
PC 246: Xmas for No Reason
PC 109: New Amsterdam
A Year Ago Today in Project Cubbins

A: One man's homage to Dr. Seuss and his second book, "The 500 Hats of Bartholemew Cubbins," which celebrated the 75th anniversary of its publication in 2013, Project Cubbins is an attempt to document the wearing of a different hat or piece of headgear every day for 500 consecutive days. No do-aheads, no banking of hats, no retroactive entries. PC started on May 27, 2013 with Hat 1.
Posted by Adam Tschorn at 7:09 PM