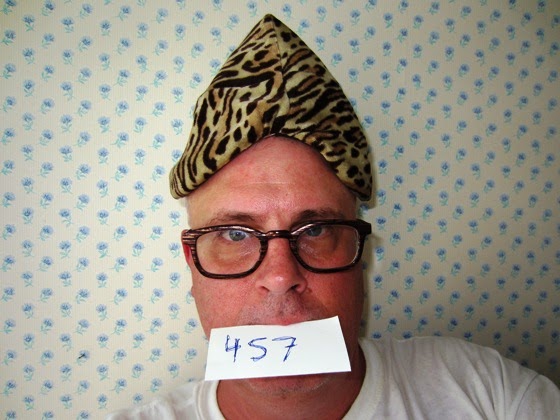 Borrowed from the KMAPLTHS (Kathleen Moore All Pine Long Term Hat Storage), this hat is part of collection of vintage lids Kathleen amassed during her childhood. She said her mom would take her around to tag sales and the like and having something to collect (the hats) gave her something to do.

Although there is no other tag or identifying information in the hat, it is the same size as the first one I featured from the collection (PC 53) which was an Evelyn Varon. A cursory search of the interwebs turns up nothing pertinent though I have a hunch it might be guild or union related (it's too tiny to be a brand identifier).

Let the leopard cone join the ranks of the mystery lids.

A sincere hat-tip to Kathleen -- both the l'il 'Thleen of old and the modern-day version (who has contributed many a lid to the effort).

A: One man's homage to Dr. Seuss and his second book, "The 500 Hats of Bartholemew Cubbins," which celebrated the 75th anniversary of its publication in 2013, Project Cubbins is an attempt to document the wearing of a different hat or piece of headgear every day for 500 consecutive days. No do-aheads, no banking of hats, no retroactive entries. PC started on May 27, 2013 with Hat 1.
Posted by Adam Tschorn at 3:16 PM