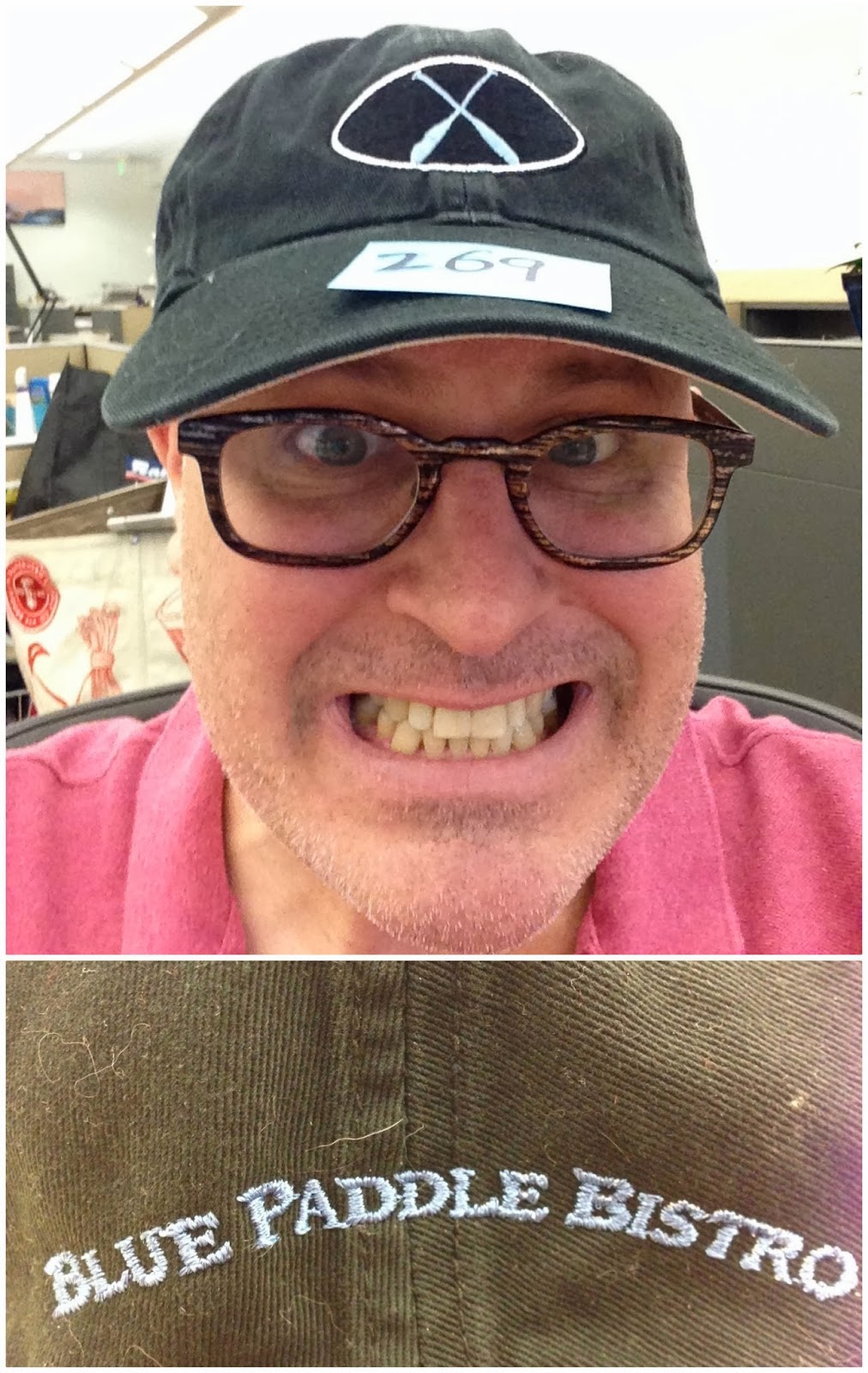 This hat was plucked at random from the SJTBOH this morning and the logo and name reference a restaurant on Route 2 in the village of South Hero, Vermont (slogan: "Love many, trust a few, but always paddle your own canoe").

For those of you who were tromping about Burlington back in my college days who might remember JM Noonies Deli, apparently the Blue Paddle traces its origins back to that eatery -- and the women behind it -- Phoebe R. Bright and Mandy Hotchkiss.

Located on a peninsula that juts out into Lake Champlain, the town of South Hero takes its name from (and was once once owned by) a couple of my personal heroes -- Ethan Allen and his brother Ira Allen (the latter of whom also founded UVM).
Here's an excerpt from the town's website:

"The Town of South Hero, located in Grand Isle County in Northwestern Vermont, lies on the Southern half of South Hero Island in Lake Champlain. The area which now encompasses South Hero, Grand Isle, and North Hero was given to Ethan and Ira Allen on October 27, 1779 as a reward for their services to the state."

In fact, according to most accounts, it was after a visit to South Hero ("with one of his workers to visit his cousin, Ebenezer Allen, and to collect a load of hay," notes Wikipedia ) that, on the return trip, the great agitator apparently suffered an apoplectic fit, fell unconscious and died a short time later -- on Feb. 12, 1789.

A hat-tip to sister Sue and a hearty "huzzah" to the brothers Allen!

Related:
PC 268: Lubbock Avalanche
PC 267: French Laundry List
PC 266: One Shade of GrayQ: OK, nice hat -- but what exactly is Project Cubbins, anyway?
A: One man's homage to Dr. Seuss and his second book, "The 500 Hats of Bartholemew Cubbins," which is celebrating the 75th anniversary of its publication in 2013, Project Cubbins is an attempt to document the wearing of a different hat or piece of headgear every day for 500 consecutive days. No do-aheads, no banking of hats, no retroactive entries. PC started on May 27, 2013 with Hat 1. Got hats? If you loan 'em, you'll get e'm back safe and sound!