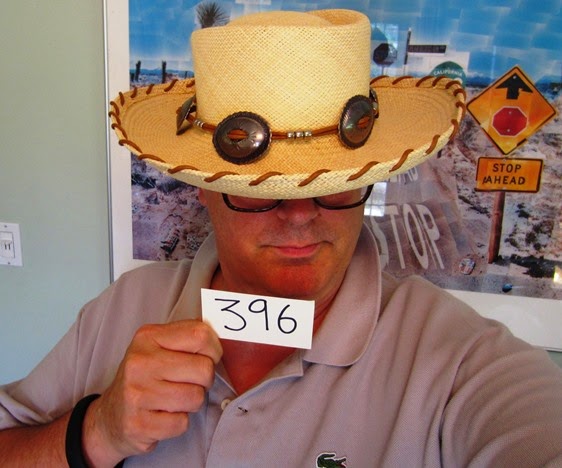 Borrowed for the Project from the Bride who purchased it in Santa Fe during her recent recon mission, and re-entered the homestead with this perched prominently upon her head.

She tells me she purchased it at a place called Double Take, a huge retail/resale shop in that New Mexico city. On a prior visit (we've been there twice together) I recall us burning the better part of a day wandering the vast interior of the store - which seems to have a little bit (scratch that, a lot) of everything on offer from consignment luxury goods (Prada Dolce & Gabbana, Chanel, Dior and the like) to Southwest pottery, furniture and assorted housewares.

I can't recall for sure but this might have been one of the heavily Kokopelli-infested places we visited during our previous visits. (I swear, the flute-playing hunchback is everywhere in that city).

A sincere hat-tip to the Bride for keeping her head in my game.

A: One man's homage to Dr. Seuss and his second book, "The 500 Hats of Bartholemew Cubbins," which celebrated the 75th anniversary of its publication in 2013, Project Cubbins is an attempt to document the wearing of a different hat or piece of headgear every day for 500 consecutive days. No do-aheads, no banking of hats, no retroactive entries. PC started on May 27, 2013 with Hat 1.
Posted by Adam Tschorn at 3:17 PM