Project Cubbins: Hat 400 - Life is But a DreamWorks Edition 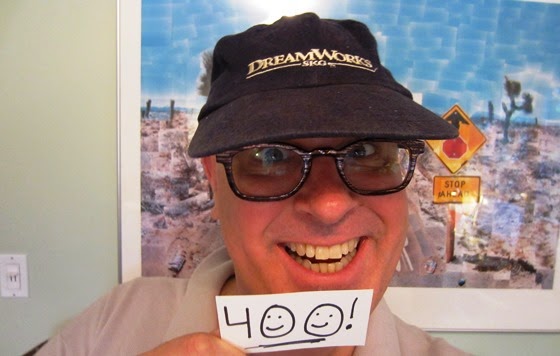 I've worn many hats in my day, but this one represents my first foray into the entertainment industry. I'd been in L.A. for all of three months when I landed a gig writing for "Majority Rules," a game show being developed by the then brand-spankin'-new studio formed by Hollywood power players Spielberg, Katzenberg and Geffen.

The short-lived series, hosted by Marc Summers and Arthel Neville, actually aired in two markets (Phoenix and New Orleans) for parts of 1996 and 1997 and, although it didn't ultimately flourish, it was responsible for kicking off my run as a Q-and-A man on a handful of quiz shows spanning the next decade.

Today's hat-tip goes to the man who gave me that first job - the show's executive producer and creator Mark Maxwell-Smith who took a chance on a newbie from New England and profoundly shaped the arc of my career. Hats off (and a deep bow of gratitude) to you.

In a way, Project Cubbins has turned out to be a lot like that first game-show-writing gig - I didn't see it coming, I had no idea what to expect once I got started and I've met a lot of cool people and worn a lot of hats since

Sure, I've still got 100 hats ahead of me but as of today I've got 400 in the rear view mirror. And that feels mighty good!

A: One man's homage to Dr. Seuss and his second book, "The 500 Hats of Bartholemew Cubbins," which celebrated the 75th anniversary of its publication in 2013, Project Cubbins is an attempt to document the wearing of a different hat or piece of headgear every day for 500 consecutive days. No do-aheads, no banking of hats, no retroactive entries. PC started on May 27, 2013 with Hat 1.
Posted by Adam Tschorn at 8:39 AM