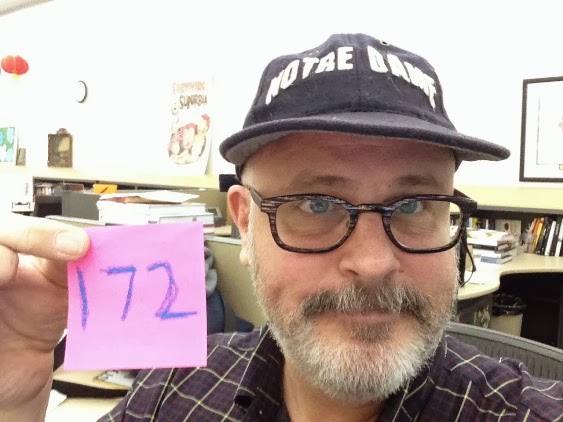 This is an IS series loaner to Project Cubbins -- a meaningful one to be sure since Notre Dame is  'Grid's alma mater.

Here's a little explanation about the school colors plucked from the official site of Notre Dame Athletics:

"The origin of school colors can be traced back to the founding of the University. At the time of its founding in 1842, Notre Dame's original school colors were yellow and blue; yellow symbolized the light and blue the truth. However, sometime after the Dome and Statue of Mary atop the Main Building was gilded, gold and blue became the official colors of the University."

Among the things I did not know (until now) about the school which is located just north of South Bend, Indiana? The original full name, bestowed upon it in 1842 by French priest Rev. Edward Sorin, was "L’Université de Notre Dame du Lac" which translates to "The University of Our Lady of the Lake."

(For some reason that kind of reminds me of the line uttered by Elwood Blues in "The Blues Brothers," one of my favorite movies of all time: "Our Lady of Blessed Acceleration, don't fail me now!")

By the way, if If you've got some school spirit you think would look good flying from the top of my head, feel free to send a hat my way -- I'll send it back when I'm done!


OK, nice hat -- but what exactly is Project Cubbins, anyway?
A: One man's homage to Dr. Seuss and his second book, "The 500 Hats of Bartholemew Cubbins," which is celebrating the 75th anniversary of its publication in 2013, Project Cubbins is an attempt to document the wearing of a different hat or piece of headgear every day for 500 consecutive days. No do-aheads, no banking of hats, no retroactive entries. PC started on May 27, 2013 with Hat 1.
Posted by Adam Tschorn at 9:39 AM