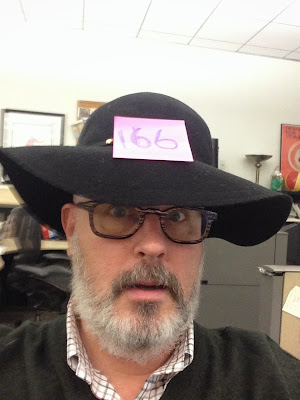 This loaner to the Project is part of the IS series and according to the San Diego Hat Company's website, it's from their Fall/Winter 2013 collection -- and one just like it can be purchased online for the princely sum of $72.

To me it's got a definite "Lady of the Canyon" vibe -- it reminds me of the kind of hat Stevie Nicks might have left on my couch after an all-night recording session.

A: One man's homage to Dr. Seuss and his second book, "The 500 Hats of Bartholemew Cubbins," which is celebrating the 75th anniversary of its publication in 2013, Project Cubbins is an attempt to document the wearing of a different hat or piece of headgear every day for 500 consecutive days. No do-aheads, no banking of hats, no retroactive entries. PC started on May 27, 2013 with Hat 1.
Got hats? If you loan 'em, you'll get e'm back safe and sound!
Posted by Adam Tschorn at 9:21 AM