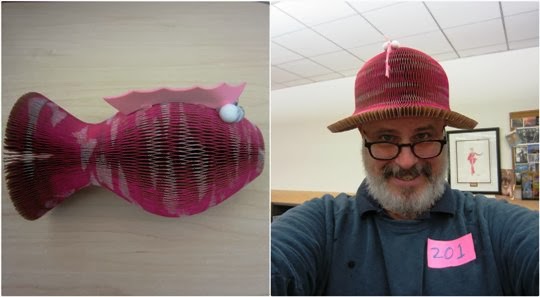 Possibly the coolest of the series to date, this piscatorial piece of headgear was loaned to the Project by our Travel section editor Catharine Hamm (who previously provided PC 71's hachimaki). She says she picked this sea creature up back in October at the Village Venture Arts & Crafts Faire in Claremont, Calif.

Although I've tried to give you an idea of what it looks like before and after in the above photos, it's the kind of thing that begs for a video of the transition from decoration to headgear which, at first, made me sad that I'd left my trusty iPhone at home today.

Then I found the below video on Youtube which is even better for several reasons. First, dude man has a British accent. Second, he seems deadly serious about his demonstration. Third, at the end of the video he puts the hat back on in a way that makes me laugh really, really hard.

So, today's hat tip goes to Catherine Hamm for her gracious loan of an awesome creation -- and random Youtube video guy for bring a little lid-related levity into my day.

A: One man's homage to Dr. Seuss and his second book, "The 500 Hats of Bartholemew Cubbins," which is celebrating the 75th anniversary of its publication in 2013, Project Cubbins is an attempt to document the wearing of a different hat or piece of headgear every day for 500 consecutive days. No do-aheads, no banking of hats, no retroactive entries. PC started on May 27, 2013 with Hat 1.
Got hats? If you loan 'em, you'll get e'm back safe and sound!
Posted by Adam Tschorn at 9:27 AM