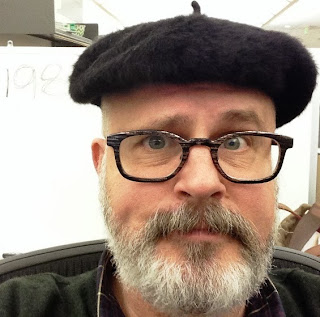 This is the last (at least for now) of the bountiful headgear series served up to the Project by Ingrid "How Many Hats?" Schmidt, and one that she brought into the office then took away and then, at my urging, brought back for its close-up.

Consider it the recalled Rykiel.

A sincere doff of the beret to Ingrid for her tireless efforts at populating the Project!

(Oh, and if you look hard enough you can see the number 198 in the upper left of the photo on the whiteboard - the contrast was not as good as I'd hoped but it's there!)

A: One man's homage to Dr. Seuss and his second book, "The 500 Hats of Bartholemew Cubbins," which is celebrating the 75th anniversary of its publication in 2013, Project Cubbins is an attempt to document the wearing of a different hat or piece of headgear every day for 500 consecutive days. No do-aheads, no banking of hats, no retroactive entries. PC started on May 27, 2013 with Hat 1. Got hats? If you loan 'em, you'll get e'm back safe and sound!
Posted by Adam Tschorn at 9:16 AM