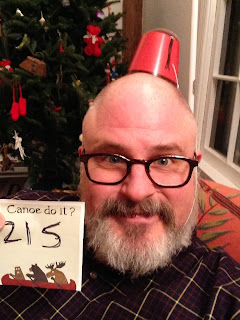 Day 215 / Hat 215: Tiny red paper fez with black printed tassel detail and elastic cord. This fez -- the Project's third such distinctively shaped hat -- was one of six in a package of "Mini Party Hats" by NPW that was in the "elf bag" my mom gave me this Christmas.

Trust me, you'll see the other five in the future -- I think I'll carry 'em with me in case of future hat-mergencies.

In case you were curious, the first fez was PC 17: The Fez Looks Familiar and the second was  PC 96: Warm and Fezzy.

Today's hat-tip? That would go to my sainted mother Nancy.