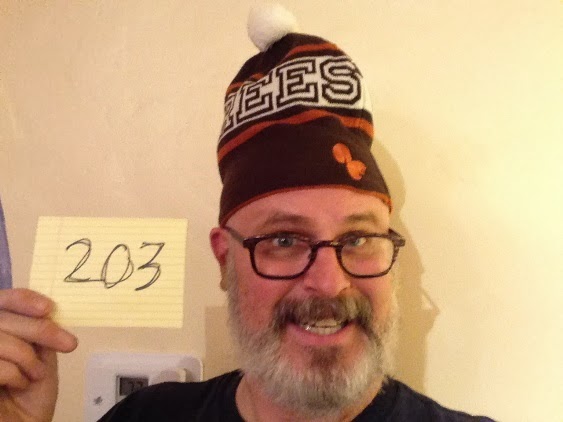 Day 203 / Hat 203: Brown knit hat with three horizontal stripes of light brown and one of white with brown intarsia letters that spell out the word: "TREES." Additional details include white pom-pom on top and light brown embroidered squirrel. Interior tag reads: "Goorin, Est. 1895. Sample not for resale, made in China."

This is just one of the many pieces of fine-looking headgear I snapped up today at the Goorin Brothers sample sale (despite the admonishment in the tag I did buy it - and  the others) in downtown Los Angeles today.

Rest assured you'll be seeing the rest of the lids in further installments of the Project, but after today this hat is off my head, out of my hands and in the mail to one Ms. Margaret Waldock -- former flame and loaner of hats 194 ("Knights in Gray Plastic") and 192 ("Leaning Letter Lid").

See, I take these headgear loans very seriously, and when MW sent me a box o' hats she sent a whole hat trick's worth - but the box arrived open, damaged and with only two hats inside. The missing hat, I'm told, was apparently the kind one uses to insulate one's self from the cold seasonal weather common on the East Coast this time of year and Ms. Waldock had hoped I'd send it back post-haste.

Due to what I can only assume was its theft while in U.S. Postal Service custody (personally I'd have made off with the chada - hardly as practical but much more of a conversation starter) I am unable to "get it back safe and sound" (as I promise below), but my hope is that this hat might be some measure of recompense.

I thought the "TREES" hat was an appropriate choice since MW in her efforts on behalf of the Geraldine R. Dodge Foundation (she directs the foundation's environmental grants) probably spends a good deal of time thinking about trees and the like. (Yes, come to think of it you could say she went from hugging me to hugging trees.)

So today's hat tip goes to she who speaks for the trees (and the fields, and the rivers and park lands) -- thanks Mags!