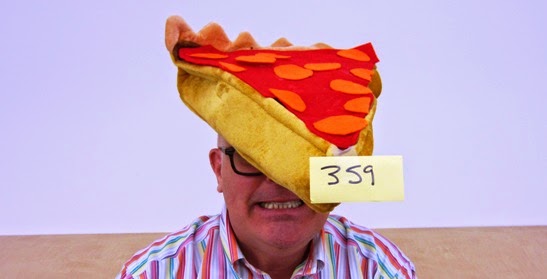 Day 359 / Hat 359: Decorative plush novelty hat in the shape of a giant triangular slice of deep-dish pepperoni pizza. The red felt "tomato sauce" and orange felt "pepperoni slices" were after-market modifications added to the hat by yours truly, with 100% wool felt sourced from Blick Art Supplies and attached with the world's oldest bottle of Elmer's Glue-All. Were you to remove a pepperoni round you might find that it is exactly the same size and shape as the top of a traditional shot glass.

Even though it looks like an art project by a four-year-old jacked up on caffeine (which, let's face it, it essentially is) this addition to the Project was in the works for a long time. It was very, very graciously ordered and sent from Amazon some weeks back by Emily O'Neill -- an early and devoted fan of Project Cubbins -- whom I cajoled into contributing a piece of headgear to the cause. 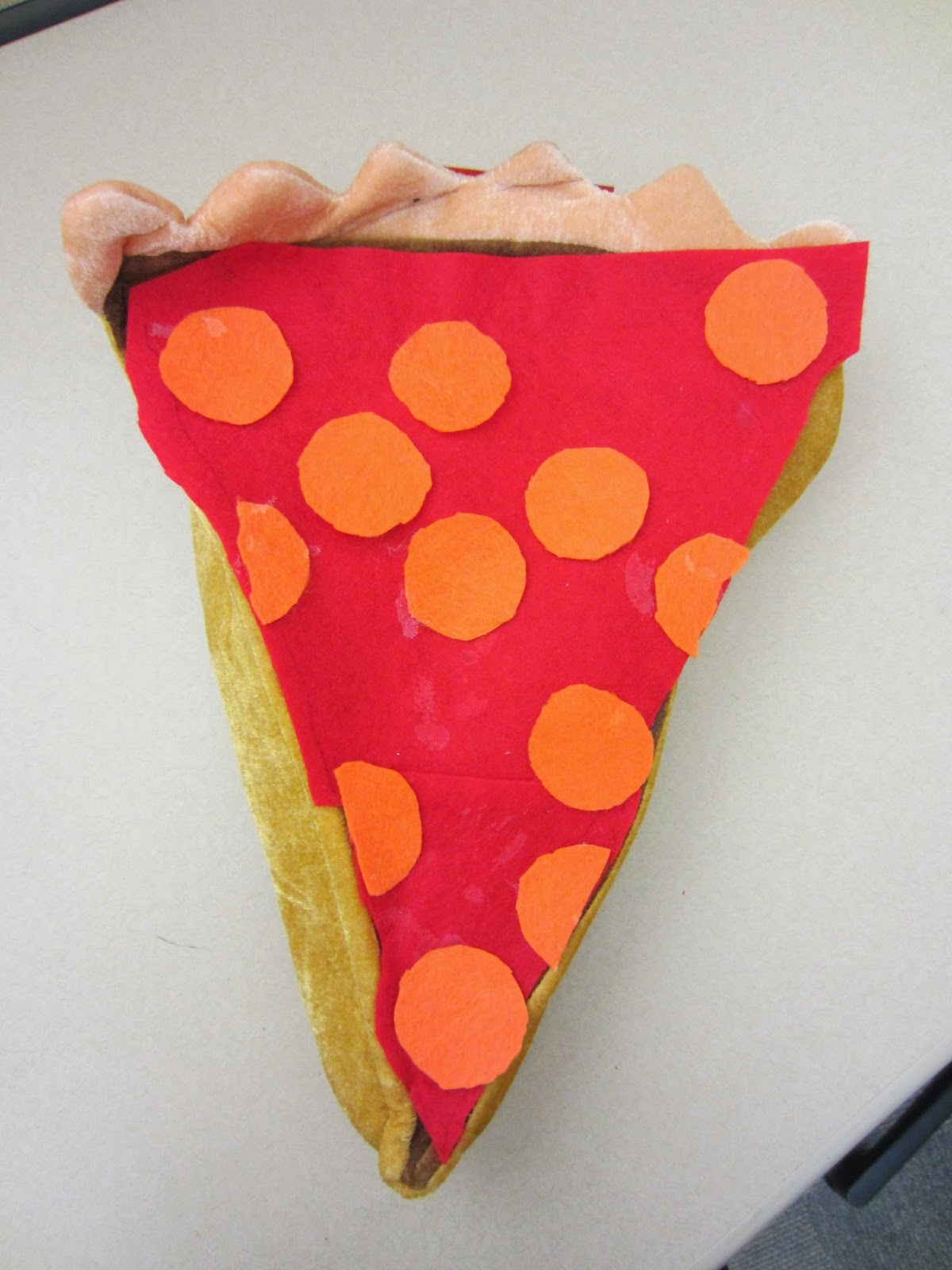 Since there have been hundreds and hundreds of hats to date, Emily didn't realize that a Beistle Pumpkin Pie Hat (one size fits most) had already been featured in the Project way back at PC 178 "Life of Pie" (to be honest, I needed to do a quick search myself). Sinvce one of my self-imposed rules is "no duplicates," I found myself in a pickle (which reminds me - I bet there's a pickle hat out there somewhere). I explained the predicament to the Bride who, with her usual lightning-fast reflexes, said "Why not make it into a slice of pizza?"

A brilliant idea, yes, but  for a long time I was convinced that in addition to removing the dollop of whip cream and adding appropriate toppings, I could modify this thing to actually serves as a tray/holder for a 12-inch on the side specially baked slice of honest-to-goodness pizza. (at one point I had approached the Test Kitchen here at work about helping me through the dough). Yes, I was hoping to eat my hat.

As you can see, I abandoned that idea, realizing I was simply trying to make it different enough to merit inclusion in the Project. Eventually I realized that it stood on its own two feet (well, crusts) in that regard -- after all how many "baseball-style caps with blah, blah, blah embroidery" have I sported since the Project started? And almost nothing but the color and shape of the various and sundry embroidered logos distinguished those from each other.  (And just in case anyone thinks I'm running a game here,  have the packing slip on file for this slice to prove I'm not recycling the first version.)

This is a long way of saying today's hat-tip - accompanied by a very deep and enthusiastic renaissance faire bow -- goes to the OG Home Slice Emily O'Neill for getting a piece of the Project Cubbins action!

A: One man's homage to Dr. Seuss and his second book, "The 500 Hats of Bartholemew Cubbins," which celebrated the 75th anniversary of its publication in 2013, Project Cubbins is an attempt to document the wearing of a different hat or piece of headgear every day for 500 consecutive days. No do-aheads, no banking of hats, no retroactive entries. PC started on May 27, 2013 with Hat 1.
Posted by Adam Tschorn at 1:42 PM