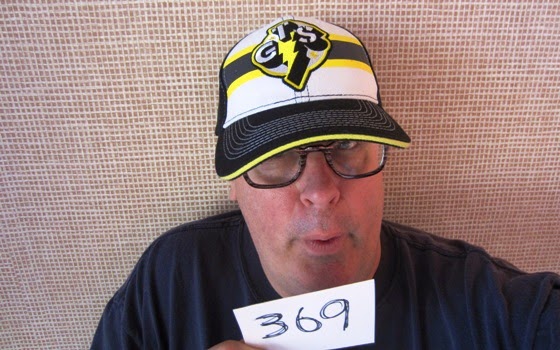 Additional details include interior label that reads "WWE Authentic" on one side and "TM & (C) WWE 2012, 100% cotton, made in China." and interior seam taping printed with WWE Authentic."

Graciously loaned to the Project by Brian Razzano (this earns him his sophomore hat-tip) who told me the following backstory about it:

"OK, so [it refers to] a wrestler named CM Punk and he was the second most over guy in the [WWE] until a couple months ago [when] he abruptly walked away from the job leaving a big hole to fill and has yet to return.

GTS refers to his finishing movie which is Go To Sleep where be basically nails his opponent in the head with his knee.

He kinda made it cool to watch wrestling again and is a cult hero after rising the ranks of the independents to become WWE champ. ... So he is a big underdog in a lot of people's eyes.

I asked for it as a birthday or Christmas gift [because] I wanted to support him.  Of course he left and WWE is starting to discount his merchandise and [he] may never return.

That hat was probably one of the last pieces they ever produced for him."

Brian says he did, indeed, receive the hat as a birthday gift from his wife (that'd be Ruth O'Neill) last year.
According to a cursory glance at Mr. Punk's Wikipedia entry, it appears his other name is Phillip Jack Brooks and he holds the distinction of "longest reigning WWE Champion of the modern era," a reign that lasted, just in case you were wondering, 434 days.

Q: OK, nice hat -- but what exactly is Project Cubbins, anyway?
A: One man's homage to Dr. Seuss and his second book, "The 500 Hats of Bartholemew Cubbins," which celebrated the 75th anniversary of its publication in 2013, Project Cubbins is an attempt to document the wearing of a different hat or piece of headgear every day for 500 consecutive days. No do-aheads, no banking of hats, no retroactive entries. PC started on May 27, 2013 with Hat 1.
Posted by Adam Tschorn at 5:30 PM