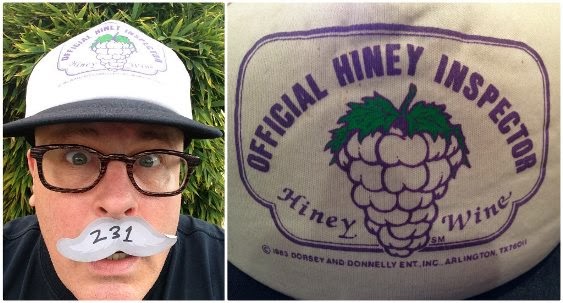 This vintage lid was loaned to the Project from my father's extensive headgear collection (which you may have noticed in the background of some of the photos posted here from the Wayside Country Store), and it may actually date to the 1983 copyright date in the fine print. My brother Al dug it out from God only knows where when I was back in the 802 for the holidays.

I' long thought there was a deeper back story to the whole "Hiney Wine" joke and a cursory search of the interwebs confirmed my hunch. According to the Hiney Wine Fan Page (yes, there is one!), the faux wine was the brainchild of of Terry Dorsey and T.J. Donnelly. Here's an excerpt:

"Hiney Wine is the comedy creation of Terry Dorsey and Donnelly, and was first syndicated in the early ’80′s. They became successful selling commercials about an imaginary winery operated by Big Red and Thor Hiney. Dorsey got the idea of the Hiney Winery as a Dayton, Ohio DJ and in September, 1981 developed it into “commercials” at KPLX, Dallas, where Donnelly was GM. They pooled $2,000 initially and eventually sold their Hiney to hundreds of radio stations, along with hundreds of thousands of dollars in Hiney merchandise.Interviewed by AdWeek in 1984, Donnelly said “People seldom get angry when they find out there really isn't a winery. If anything, they are a little put out with themselves for going along with it so far.”

I also discovered that the fake radio commercials about a fake wine eventually spawned an actual festival -- the 2013 Hiney Wine & Arts Festival (the fourth annual one) took place in Peterson, Iowa, on October 5, 2013.

The old Hiney Wine joke has been kicking around for so long now I'm a bit surprised that anything is coming out it at all.