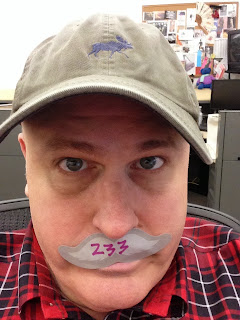 Day 233 / Hat 233: Olive drab baseball-style cap with navy blue embroidery of a moose silhouette on the front (facing the wearer's left) with additional navy blue embroidery on left side that reads: Montana" in all capital letters. Interior tag reads: "Alternative Apparel, 100% cotton, made in China."

Loaned to the Project by fellow cube farmer Tom "Montana Moose" Curwen (you might recognize his name from a mention in PC 227: The (Late) Great Outdoors). We can only assume he picked it up on one of his bear-chasing jaunts to Big Sky Country (like his two-part "Attacked by a Grizzly" series, which I highly recommend.)

By my reckoning this is the second Montana-themed installment of the Project (the first was way back with PC 20: Mom in Montana) as well as the second Moose-themed piece of headgear (the first being PC 209: Makin' a Moose of the 802).

So today's shake of the moose antlers goes to Tom Curwen -- not just for the loan of the lid but for being on trend.

Q: OK, nice hat -- but what exactly is Project Cubbins, anyway?
A: One man's homage to Dr. Seuss and his second book, "The 500 Hats of Bartholemew Cubbins," which is celebrating the 75th anniversary of its publication in 2013, Project Cubbins is an attempt to document the wearing of a different hat or piece of headgear every day for 500 consecutive days. No do-aheads, no banking of hats, no retroactive entries. PC started on May 27, 2013 with Hat 1. Got hats? If you loan 'em, you'll get e'm back safe and sound!
Posted by Adam Tschorn at 9:53 AM