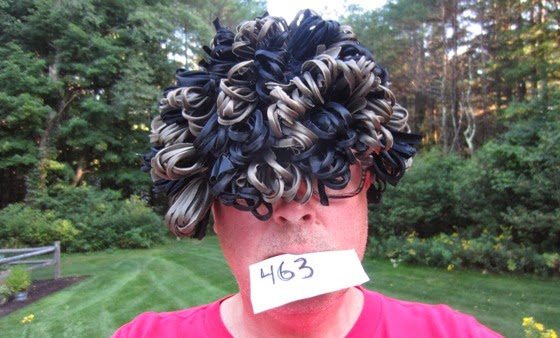 Day 463 / Hat 463: Vintage black crocheted cap festooned with loops of black and olive (at least I think that's the color) nylon fabric about half again the width of a shoelace. Interior tags read: "Emme Boutique" and "Union Made in USA, WW 586936."

Plucked for the Project by my mother-in-law from the KMAPLTHS (she may deny it but she met us in the driveway actually wearing it on her head when we drove up to the house after a midday hike).

My immediate response was not an enthusiastic one because, as longtime followers of the Project know, I have a very strict "no wig" policy and this positively screamed wig to me on first impression. But as she explained it is indeed a hat and she'd found mention of the aforementioned Emme on the interwebs. Our cursory search turned up a plea for more information  on the label from a resource called the Vintage Fashion Guild and the following bit of intel about a milliner named Adolfo that mentions the brand:


"Adolfo (Sardina) (b. 1933) began his career as a milliner. After an apprenticeship with Balenciaga as a teenager, he moved to New York in 1948 and became an apprentice milliner at Bergdorf Goodman. He worked as a designer for milliner Erik Braagaard in the early 1950s and in 1953 was named head designer at Emme, where he received two awards for his millinery designs—a Coty “young designer” award in 1955, and a Neiman Marcus award, shared with Emme, in 1959. As widely praised as his collections for Emme were, he felt he was not receiving due credit there (his name never appeared on the label) and left in February 1962. Later that year, he opened his own millinery house with a $10,000 loan from Bill Blass."

Today's lesson? Never judge a hat by its wigness.

Thanks to the MIL for the reminder that things aren't always as they seem.

A: One man's homage to Dr. Seuss and his second book, "The 500 Hats of Bartholemew Cubbins," which celebrated the 75th anniversary of its publication in 2013, Project Cubbins is an attempt to document the wearing of a different hat or piece of headgear every day for 500 consecutive days. No do-aheads, no banking of hats, no retroactive entries. PC started on May 27, 2013 with Hat 1.
Posted by Adam Tschorn at 3:39 PM