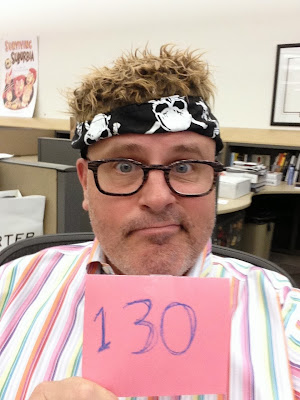 This came to me as an "elf bag" gift from my sainted mother several Christmases past and inspired by appreciation of all things piratical. When I pulled it out and plopped it on my head, the entire room full of family members filled with chuckles -- since it pretty much approximates what my hair looked like back when I had it.
It's a sight-gag of a lid that never seems to get old. It got the best reaction's ever one New Year's Eve in Las Vegas. At some point after midnight I pulled it out and stuck it on my head to accessorize my tuxedo.

Several hours later, the Bride, the Sister-in-Law and I got on to a crowded elevator to head up to our room and, after a few floors I was feeling a bit warm so I took it off and used it to mop my fevered brow.

I looked up to see four strangers in the elevator staring at my with wide eyes and slack jaws.

My two bemused companions, realizing that my flair had, indeed, been mistaken for real hair, leaned against the elevator wall and laughed uncontrollably the rest of the way to our floor.