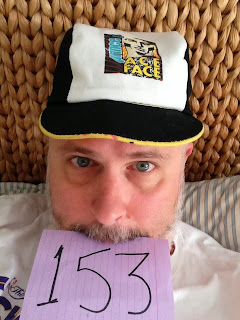 Day 153 / Hat 153: Black and white cycling-style cap with red and black confetti pattern on yellow on underneath side of the bill and screen printing on front that reads: "Prince Ace Face."

On loan to the Project from Jenn Harris, I was pretty sure my research was going to turn up that this hat was concert merch from a tour by the artist formerly (and currently) known as Prince and that "Ace Face" was either the name of a little known album, an alter-ego or perhaps an opening act.

Turns out there was actually a brand  back in the day (that day being the late '80s and early '90s) called Prince Ace Face and the name and logo appeared on athletic apparel and tennis rackets.

I still think it would make an awesome name for a Prince stadium tour, though.

OK, nice hat -- but what exactly is Project Cubbins, anyway?
A: One man's homage to Dr. Seuss and his second book, "The 500 Hats of Bartholemew Cubbins," which is celebrating the 75th anniversary of its publication in 2013, Project Cubbins is an attempt to document the wearing of a different hat or piece of headgear every day for 500 consecutive days. No do-aheads, no banking of hats, no retroactive entries. PC started on May 27, 2013 with Hat 1. Got hats? If you loan 'em, you'll get e'm back safe and sound!
Posted by Adam Tschorn at 2:36 PM