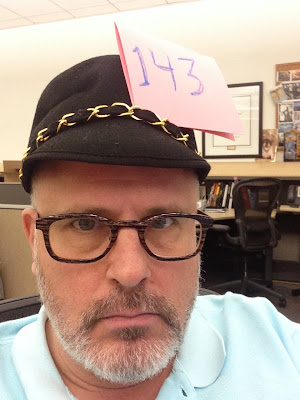 The hat - and the interior tag- look so old we were convinced this was a seriously vintage lid, but a quick search of the interwebs reveals that the aforementioned Cha-Cha's is still very much a going concern -- and is the millinery design studio of a designer named Dina Pisani.

Loaned to the Project by Ingrid -- who by my count is at hat-trick-plus-one. Her flurry of recent contributions pushes her closer to officially joining the ranks of the Multiple Hat Donor Club (MHDC), a very exclusive and (oddly, come to think of it) all female group of high-volume hat-lenders.


OK, nice hat -- but what exactly is Project Cubbins, anyway?
A: One man's homage to Dr. Seuss and his second book, "The 500 Hats of Bartholemew Cubbins," which is celebrating the 75th anniversary of its publication in 2013, Project Cubbins is an attempt to document the wearing of a different hat or piece of headgear every day for 500 consecutive days. No do-aheads, no banking of hats, no retroactive entries. PC started on May 27, 2013 with Hat 1. Got hats? If you loan 'em, you'll get e'm back safe and sound!
Posted by Adam Tschorn at 10:11 AM