Project Cubbins: Hat 147 - By the Way, Which One's Pink? Edition 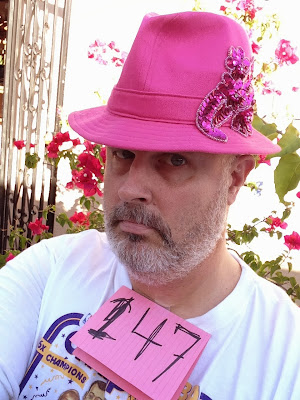 Borrowed from the Bride's holdings, she says of its provenance: "I'm pretty sure I go it when I was in London -- a long time ago."

You may not be familiar with the milliner's name (the brand appears to have both names run together, the designer's name is two words: "Misa Harada"), but you've doubtlessly seen her work. The following is a brief excerpt from the profile at her website:

Commissions from style icons and celebrities include men's hats for The Scissor Sisters, The Rolling Stones, Mickey Rourke as well women's headwear for Jennifer Aniston's wedding, Britney Spear's "Blackout" album cover and hats for Janet Jackson's "All for you" tour. Misaharada was also behind many of the millinery delights featured in the "Sex and the City" series.


OK, nice hat -- but what exactly is Project Cubbins, anyway?
A: One man's homage to Dr. Seuss and his second book, "The 500 Hats of Bartholemew Cubbins," which is celebrating the 75th anniversary of its publication in 2013, Project Cubbins is an attempt to document the wearing of a different hat or piece of headgear every day for 500 consecutive days. No do-aheads, no banking of hats, no retroactive entries. PC started on May 27, 2013 with Hat 1. Got hats? If you loan 'em, you'll get e'm back safe and sound!
Posted by Adam Tschorn at 4:10 PM