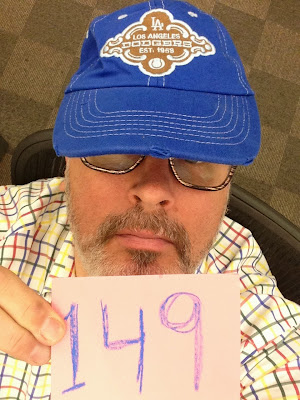 The second hat in the current JH series, it's one I wish I'd had back when the Dodgers were still alive in the playoffs. As the season was winding down and Dodger mania was ramping up I found myself searching frantically for my own Dodgers cap - which  distinctly recall purchasing years and years ago when I took the visiting Halfew to a game in Chavez Ravine (I distinctly remember going to buy a hat and a Dodger Dog as he and his baseball glove headed to the seats).

The 1958, btw, refers to the year the team first played as the LOS ANGELES Dodgers -- the team made its National League debut back in 1890 in Brooklyn. While you are probably  aware that the team's name (shortened from "Trolley Dodgers")  is a reference to the borough's then maze of trolley cars, you might not be aware that the team started out with a very different nickname: the "Bridegrooms."

The explanation, from the franchise history section of the team's mlb.com page is as follows:

"The moniker "Bridegrooms" was attached to Manager William 'Gunner' McGunnigle's 1890 ballclub because seven of the players got married around the same time in 1888."

I so did not know that when I started this post ...

OK, nice hat -- but what exactly is Project Cubbins, anyway?
A: One man's homage to Dr. Seuss and his second book, "The 500 Hats of Bartholemew Cubbins," which is celebrating the 75th anniversary of its publication in 2013, Project Cubbins is an attempt to document the wearing of a different hat or piece of headgear every day for 500 consecutive days. No do-aheads, no banking of hats, no retroactive entries. PC started on May 27, 2013 with Hat 1. Got hats? If you loan 'em, you'll get e'm back safe and sound!
Posted by Adam Tschorn at 9:14 AM