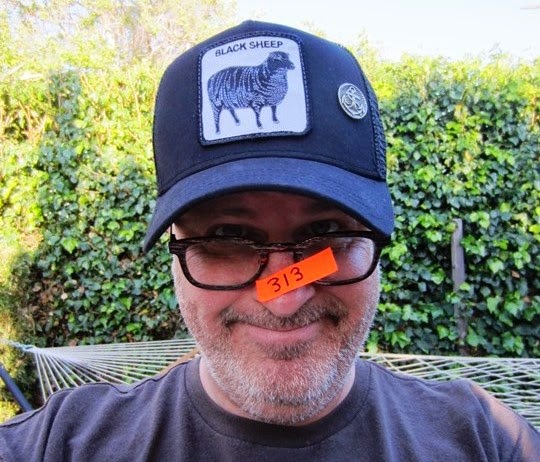 Day 313 / Hat 313: Black, trucker-style cap with cloth front, mesh back and black and white embroidered patch on front of a black sheep beneath the words "Black Sheep." Detail on back includes Goorin's castle logo in white on a black square. Additional detail (added by me for a bit of maritime flair) is a round metal pin depicting an anchor.

I picked this lid up on Larchmont Blvd. today specifically for the Project, having seen similar Goorin hats ("Bear" and "Cock" to be exact) at a store in Palm Springs. I was headed for one of those two when I stepped into the Goorin store on Larchmont but opted for the Black Sheep as that's what I've always been told my last name means in Russian. The truth, of course, is something a bit more convoluted than that. Here's a brief excerpt from a site called the Surname Database about the last name "Tchir" that applies to "Tschorn" as well (I distinctly recall some of the same verbiage on a scroll - yes  a scroll - I ordered many years ago):

"[Tchir] is a Polish-Slav surname of uncertain origins. It is probably a 'short form' of a patronymic nickname surname such as 'Tschorn', and in that respect would be a form of the English surname 'Black', originally a literal description for a dark or swarthy person, or more logically a description of national origins such as Celt, Gael, Slav or Mongol, all of whom were black haired."

Black sheep, swarthy Slav, it makes no never mind to me, since I kinda like the "Naughty Lamb" style name Goorin's given the cap. I thnk next time I explain the meaning of my last name I'm going with that ....

Related:
PC 312: Brown Burlapish
PC 311: Yellow DotPC 310: Agua Caliente Cap
Q: OK, nice hat -- but what exactly is Project Cubbins, anyway?
A: One man's homage to Dr. Seuss and his second book, "The 500 Hats of Bartholemew Cubbins," which is celebrating the 75th anniversary of its publication in 2013, Project Cubbins is an attempt to document the wearing of a different hat or piece of headgear every day for 500 consecutive days. No do-aheads, no banking of hats, no retroactive entries. PC started on May 27, 2013 with Hat 1. Got hats? If you loan 'em, you'll get e'm back safe and sound!
Posted by Adam Tschorn at 6:29 PM