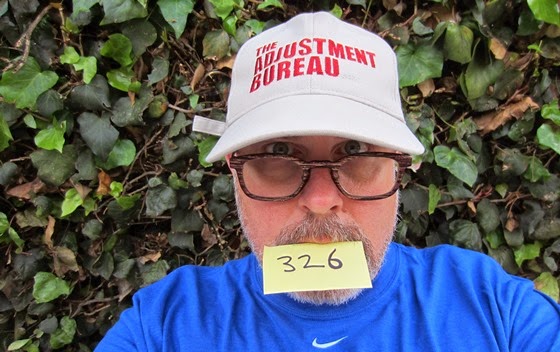 Day 326 / Hat 326: Khaki-colored basebeall-style cap with red embroidery on front that reads: "The Adjustment Bureau." Interior tag reads: "Authentic Head Shots by KC Caps," on one side and "made in Bangladesh" on the other.

Most likely this was originally a cast and crew gift (or a promotional freebie) related to the movie of the same name. I purchased it minutes ago from the Good Will store at 7919 Beverly Blvd. not far from Project Central, having identified the store earlier this morning as a potential source of headwear.

While There was a deep bench of hattery on hand, I picked this one nearly immediately because the movie whose name graces the front was a particularly hat-heavy one. (I did a q-and-a with the film's costume designer Kasia Walicka Maimone titled "The hierarchy of hats" back in 2011.)

Oh, and just in case you were wondering, the hat is adjustable in the back.

(You can e-mail me at: adam at adamtschorn.com)
Posted by Adam Tschorn at 6:51 PM