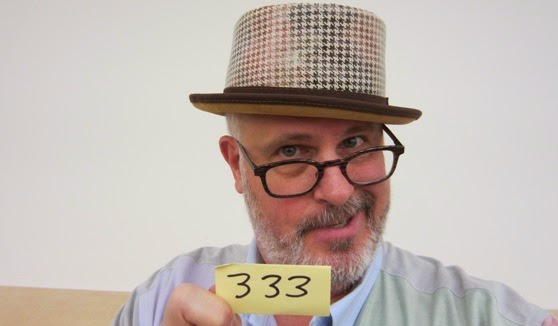 The "Bourbon" part refers to the style name, and a quick check of Ashbury's site reveals this particular pattern/color combination as "Honey" (other options include "Burlap" and "Cedar"). So yes, I've gone all honey bourbon porkpie up top today. Which kind of makes me hungry.

Another loaner lid from the PR sample closet at The Headwear Association, Ashbury (slogan: "Exclusive designs inspired by the S.F. underground. Unrivaled quality,") is a sub-brand of Head'n Home Handmade Hats. If that name sounds familiar to followers of the trek to 500, that's because They're the same folks that make the Steampunk Hatter line, a hat from which was featured in the extremely popular installment PC 331 two days ago.

As for the quote tucked into the back of the interior label? I don't know about sleeping when I'm dead but I'm pretty sure that after the next 167 lids I'll be taking a quick hat nap.