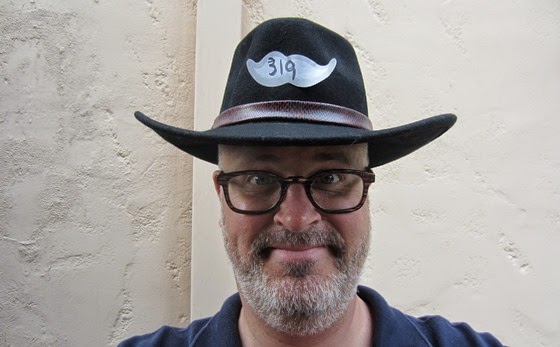 Cribbed from the Bride's headgear archive. Of its provenance she says: "I think I bought that back before hats were so big [as in popular]." She says she probably bought for some kind of "cowboy situation."

"I think  I got it when we were getting to go to Santa Fe for Thanksgiving or something like that," she said.

At any rate, the Liz Claiborne of old doesn't exist any more - the company changed its name to Fifth & Pacific and sold off the namesake brand to J.C. Penney Co.a few years back.

The names may change, but the hats remain the same ...

Related:
PC 318: Tarnish Up Top
PC 317: Closet SOBPC 316: Feelin' BookishQ: OK, nice hat -- but what exactly is Project Cubbins, anyway?
A: One man's homage to Dr. Seuss and his second book, "The 500 Hats of Bartholemew Cubbins," which is celebrating the 75th anniversary of its publication in 2013, Project Cubbins is an attempt to document the wearing of a different hat or piece of headgear every day for 500 consecutive days. No do-aheads, no banking of hats, no retroactive entries. PC started on May 27, 2013 with Hat 1.
Posted by Adam Tschorn at 6:14 PM