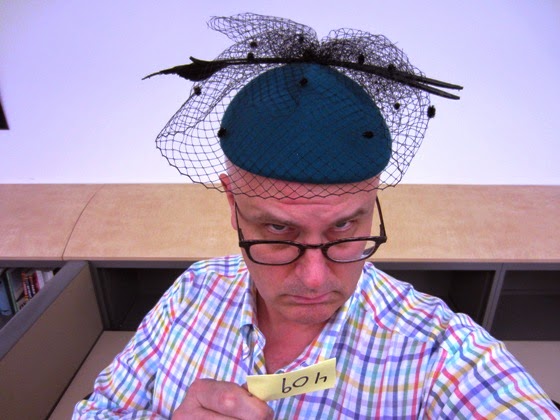 Day 409 / Hat 409: Forest green wool cap adorned with dotted black birdcage veil and two large black feathers. Interior label reads: "Pins and Needles" and tag reads: "made in China, RN #66170, CA#32054, 100% wool, one size, dry clean only, French on reverse" (i.e. the admonishment to "dry clean only" is rendered in French on the reverse side of the tag).

As far as I can tell, "Pins and Needles" is an Urban Outfitters private label, and based on my reading of term, I believe it to be a cloche. (If not I'll go with: "cloche but no cigar ...")

This is an exceedingly random hat thrown into the ring after I walked the cube farm lamenting that I had no hat for today's installment. My fellow cube farmer Marilyn (she of the MRBOH) said: "I've gt a hat for you," and reached under her desk and pulled out this one. She's a bit unsure of its provenance but thinks it dates to a long ago fashion shoot (though perhaps not as long ago as the style may suggest ...)

Oh, and apologies for hoisting an upside-down number in the above photo. I'm just throwing digits all over the place these days ...

Related:
PC 309: Ace in the Hole
PC 109: New Amsterdam
A Year Ago Today in Project Cubbins

Q: OK, nice hat -- but what exactly is Project Cubbins, anyway?
A: One man's homage to Dr. Seuss and his second book, "The 500 Hats of Bartholemew Cubbins," which celebrated the 75th anniversary of its publication in 2013, Project Cubbins is an attempt to document the wearing of a different hat or piece of headgear every day for 500 consecutive days. No do-aheads, no banking of hats, no retroactive entries. PC started on May 27, 2013 with Hat 1.
Posted by Adam Tschorn at 4:24 PM