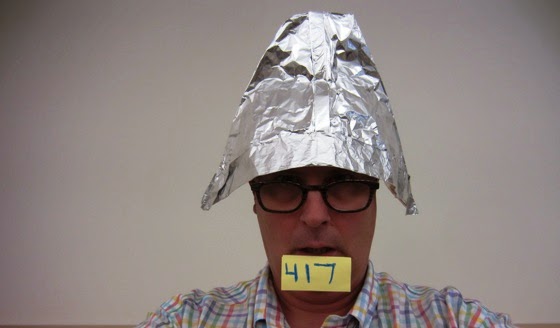 
Constructed yesterday by our Test Kitchen Director Noelle Carter ("Instead of doing my work," she says.) She notes that upon completion it was modeled by various fellow cube farmers before alighting in a place of honor -- the inflatable turkey wearing a bacon bandage at Noelle's desk -- where it caught my eye first thing upon my arrival this morning.

I have a strange connection to the tin foil story (yeah, I know it's aluminum and not tin): My dad distinctly recalls, as a kid, when his own father (Frank Henry Tschorn and an engineer by trade) worked for Reynolds Metals as the company was trying to get the thickness of its product just right for introduction into home use.

The result? Lots and lots of rolls of foil - some too think, some too thin. Which means daddy-o and his brohams had plenty of tin foil hats to go around.

The lesson here? The crumpled ball of aluminum foil doesn't fall far from the tree.

Q: OK, nice hat -- but what exactly is Project Cubbins, anyway?
A: One man's homage to Dr. Seuss and his second book, "The 500 Hats of Bartholemew Cubbins," which celebrated the 75th anniversary of its publication in 2013, Project Cubbins is an attempt to document the wearing of a different hat or piece of headgear every day for 500 consecutive days. No do-aheads, no banking of hats, no retroactive entries. PC started on May 27, 2013 with Hat 1.