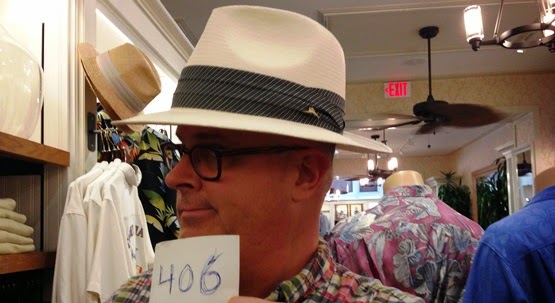 Stealth-snapped at the Tommy Bahama store at the Grove this afternoon -- purely at the instigation of the Bride. What did I learn from this -- other than the fat that if you act like you know what you're doing you can get away with almost anything in a public place? I learned a new word: "toyo." According to the Merriam-Webster online dictionary, toyo is" "a shiny smooth straw made chiefly in Japan from shellacked rice paper and used especially for hats."

As always, the stealth-snap was a spur-of-the-moment decision and I feel obligated, in exchange, to make sure all of you know that should you find such a stylish chapeau to your liking, you can find the toyo topper in Tommy Bahama stores (but not online here - it's sold out).

Q: OK, nice hat -- but what exactly is Project Cubbins, anyway?
A: One man's homage to Dr. Seuss and his second book, "The 500 Hats of Bartholemew Cubbins," which celebrated the 75th anniversary of its publication in 2013, Project Cubbins is an attempt to document the wearing of a different hat or piece of headgear every day for 500 consecutive days. No do-aheads, no banking of hats, no retroactive entries. PC started on May 27, 2013 with Hat 1.
Posted by Adam Tschorn at 4:17 PM