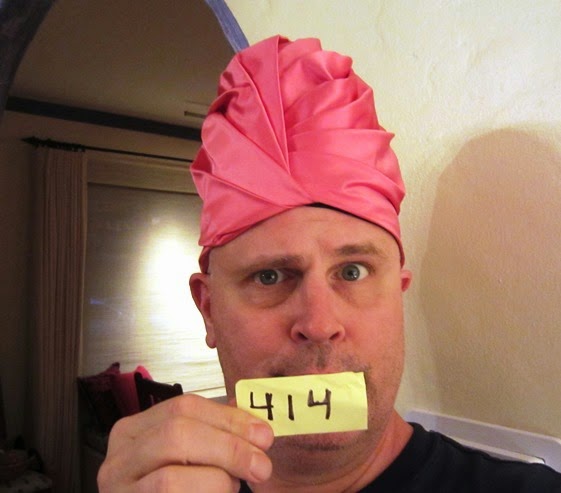 Graciously loaned to the Project from the Bride's archival hat holdings. At first she demurred, not wanting to spoil the big reveal (she's determined to save it for her turban-wearing years) until I convinced her that the flash in the pan of an early 400s installment of the Project hat will certainly not be stealing her future headgear thunder.

Also, as I explained to her, today was for the birds and I couldn't think of a better pick-me-up than a pleated pink Prada turban (say that five times fast!).

For the record, she did make me wash and towel dry my head so I didn't soil it for future wearings.

As near as our collective memories serve us (buttressed by the slightest amount of web-sleuthing) this turban was the one featured in Prada's Spring 2007 ready-to-wear runway show.

A: One man's homage to Dr. Seuss and his second book, "The 500 Hats of Bartholemew Cubbins," which celebrated the 75th anniversary of its publication in 2013, Project Cubbins is an attempt to document the wearing of a different hat or piece of headgear every day for 500 consecutive days. No do-aheads, no banking of hats, no retroactive entries. PC started on May 27, 2013 with Hat 1.
Posted by Adam Tschorn at 8:49 PM