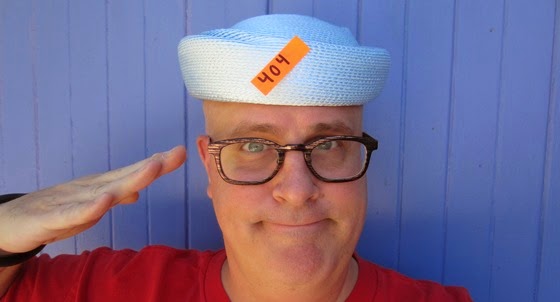 One of the PHQ (Painter Family Quartet), Nancy Williams Painter says of its provenance: "The powder blue pill box was a Grandma gift, a momentary lapse into the unwearable on the part of my Mom."

One mom's trash is another man's treasure as the saying goes (or something along those lines) and I figured it'd make a suitable Fourth of July installment alongside a red T-shirt and some tufts of white hair (that of it which hasn't already circled the great drain in the sky) with a salute thrown in for good measure.

While today's hat-tip is due to the Painter family, I doff this cap -- and all caps to date - on behalf of those who carry within them the true meaning of what the Independence Day holiday truly stands for and those who have fought to preserve that which makes this country so special and improve the lives of those within its borders. Your arenas are many and varied; the battlefield, the city street, the burning forest, the pulpit, the newspaper page, the blinking pixel, the legislative chamber and the country store cash register.

But each and everyone one of you are a roman candle of inspiration. On your own an explosion of unique brilliance, but together a sky full of fireworks that never dim.

HAPPY FOURTH OF JULY TO ALL!

Related:
PC 204: Adam of Arabia
PC 104: Talking to Strangers (a Project Favorite!)
A Year Ago Today in Project Cubbins

A: One man's homage to Dr. Seuss and his second book, "The 500 Hats of Bartholemew Cubbins," which celebrated the 75th anniversary of its publication in 2013, Project Cubbins is an attempt to document the wearing of a different hat or piece of headgear every day for 500 consecutive days. No do-aheads, no banking of hats, no retroactive entries. PC started on May 27, 2013 with Hat 1.
Posted by Adam Tschorn at 2:57 PM