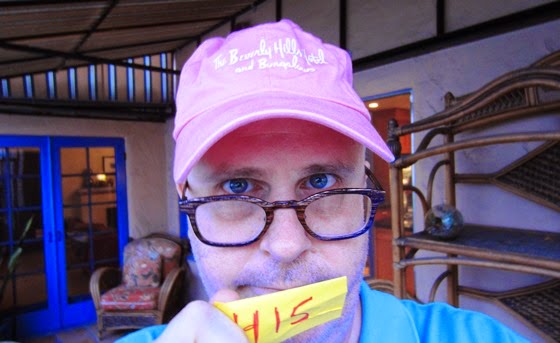 Day 415 / Hat 415: Bright pink, baseball-style cap with white embroidery that reads: "The Beverly Hills Hotel and Bungalows." Interior tag reads: "Imperial, since 1916, Denver Colorado," and fabrication tag reads: "100% cotton, made in Vietnam" and it looks as if the date of manufacture was 10/09.

Borrowed for the Project from the Bride's headwear archives she says of its provenance: "I think I got it when I stayed there years ago with my mom -- I certainly didn't get it there when we stayed there with one of the anniversary IOUs you promised me."

I wear this hat for today's installment of the Project with a heavy heart because, while my march toward 500 hats means I'm pretty much an equal-opportunity hat-wearer, the aforementioned hotel has ties to the sultanate of Brunei which has been the subject of a recent boycott thanks to its recently passed strict anti-gay laws.

We last darkened the doorstep there on Easter, the day before news of the new laws - and resulting boycott by the fashion community -- broke.

Q: OK, nice hat -- but what exactly is Project Cubbins, anyway?
A: One man's homage to Dr. Seuss and his second book, "The 500 Hats of Bartholemew Cubbins," which celebrated the 75th anniversary of its publication in 2013, Project Cubbins is an attempt to document the wearing of a different hat or piece of headgear every day for 500 consecutive days. No do-aheads, no banking of hats, no retroactive entries. PC started on May 27, 2013 with Hat 1.
Posted by Adam Tschorn at 8:38 PM