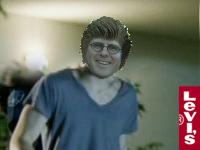 This personalized Levi's ad was part of my "research" for work -- and yeah, I guess the viral video thing works. If nothing else, it'll teach the Sec Def not to get all up on my 501s!
Posted by Adam Tschorn at 2:34 PM No comments:

J.K. Rowling, author of the popular Harry Potter series, was reportedly in a dust-up with TSA officials in New York City over whether or not she could bring the manuscript to her latest book on board as carry-on luggage.
While Rowling characterized the incident as over-reaction to recent terrorist threats, TSA spokesman Dan Ketterling told reporters the manuscript was simply too large to fit in the overhead compartment or securely under the seat.
"The document in question was approximately four reams of 81/2 by 11-inch paper," said Ketterling. "For those of you unfamiliar with this archaic slighlty dirty sounding term, a ream is 20 quires of paper -- or approximately 500 sheets, making the entire manuscript - which I'm told is actually only half written -- about 2,000 pages."
Rowling said that if she was not allowed to board with her "Harry" reams, she would be forced to fire up her trusty Nimbus 3000 (pictured).
"She was a bit of a witch about the whole thing," Ketterling commented.
Posted by Adam Tschorn at 2:42 PM No comments: 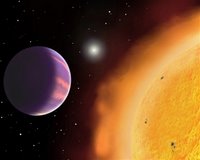 According to the Associated Press, astronomers have discovered what's being described as a "puffy planet" -- the largest and least dense such body discovered outside our solar system. Previously thought to be a star in the J. Lo system, scientists describe the planet as having a surface littered with bright rocks and an interior composed primarily of Cristal. "It has one very unique characteristic," said Dr. Asif Syed of the International Astronomer's Union. "That's a closely orbiting moon which casts a penumbra over the planet's surface, keeping it cool all year long." Syed said the IAU has dubbed the satellite "Farnsworth."
Shortly after the discovery, a rep for the planet announced to the media that the celestial body preferred to be known simply as "Diddy."
Posted by Adam Tschorn at 9:58 AM No comments:

U.S. Secretary of State Condoleeza Rice today urged Sudan "in the strongest possible terms" to let U.N. enter its troubled Darfur region. A source in the office of Sudan's Foreign Minister Lam Akol told reporters that Rice suggested that "a few stiff drinks" might make it seem like a more appealing proposition.
"Then she said if that didn't work then the best thing Sudan could do is simply drop her defenses and take like a soverign nation because the U.N. was entering the region one way or the other. Then she mumbled something about leaning back and thinking about baseball."
In a White House press conference today, Rice denied ever making such a threat but said the U.N. would be justified in any attempt to enter the country.
"We all agree that under the right economic conditions it's got a rather attractive border," she said. "And let's face it, Sudan is practically begging for a little cross-border action. No wonder there's been such an intense build up of international pressure."
A full transcript of Rice's speech will be aired later tonight on the country's Khartoum Network
Posted by Adam Tschorn at 2:50 PM No comments: 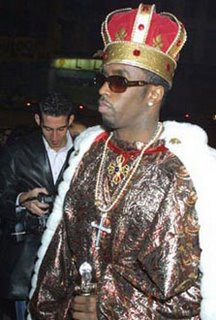 Apparently two Diddys in the United Kingdom is one Diddy too many. The many-nicknamed rapper, producer and fashion mogul Sean "Diddy" Combs has settled a British court case by agreeing not to use his most recent sobriquet in England.
The settlement with London-based music producer Richard "Diddy" Dearlove prevents Combs from using the name for commerical activities in that country. Luckily Combs has a deep bench of alternative names to draw on and has told the Associated Press he may even take the opportunity to create some new ones from scratch specifically for the U.K. Sources close to Combs' camp have leaked the following short list:
Sean Féin
Sir Cumference
£
The Thin Black Duke
Stang
Baron Down
Tony Flair
Whiggy
Ozkar 2Wild
The Aristo-Cat
Bartleby
Dane
Pierced Brosnan
Lord E
Crown Royal
Posted by Adam Tschorn at 8:32 AM No comments: 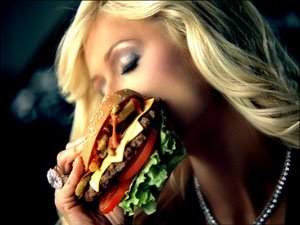 Celebutante Paris Hilton was busted for DUI early this morning after driving erratically in Hollywood. According to published reports, the socialite, who in the past has appeared in TV ads wrapping her lips around a juicy Carl's Jr. burger, had poured a single margarita down her throat before climbing behind the wheel in pursuit of an In-N-Out burger.
Sources close to incident say that shortly after Hilton blew into a Breathalyzer at the scene of the traffic stop, a spokesman for the Breathalyzer announced plans to sell videos of the late-night encounter via the Internet.
Posted by Adam Tschorn at 11:14 AM No comments:

WASHINGTON, DC -- Defense Secretary Donald H. Rumsfeld underwent successful shoulder surgery Tuesday to repair a torn rotator cuff, a result of consistent and repetitive shrugging off of war-related criticism, said his doctors.
"Look, the man's 74," said Dr. Ellis Danvers who operated on Rumsfeld's left shoulder at the Walter Reed Army Medical Center in Washington. "And he's been shouldering the blame on this Iraq thing for quite a long time." The U.S. General Accounting Office placed the overall cost of Rumsfeld's repeated deflection of criticism at nearly $44 billion. "And counting," said Danvers. "I hope he's enrolled in the revised Medicare prescription drug coverage plan because this is going to take along time to heal."
Posted by Adam Tschorn at 9:23 AM No comments:

Too bad about that crocodile hunter's getting killed. They say it was a fluke, but, having read the story closely four times now, I still contend it was the stingray. -- Tom Quinn
Note: The Riff will include riffed-from-the-headline guest editorials when they are deemed funnier than anything he could come up with. Thanks TQ.

Posted by Adam Tschorn at 8:27 AM No comments: