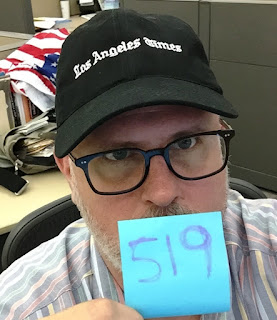 Black, baseball-style cap with adjustable Velcro closure in the back and white embroidery on the front that reads: "Los Angeles Times." Interior tag reads: "Apollo USA, made in China."

This hat came into my possession less than two hours ago at an employee town hall meeting. Since the meeting itself was off the record all I'm at liberty to say is that many of these hats were handed out - gratis - to other attendees prior to the off-the-record portion of said meeting.

While headgear is no longer posted on a daily basis, the occasional cap, hat or bonnet – if deemed worthy and non-duplicative – is sported here for the amusement of all.
Posted by Adam Tschorn at 10:55 AM 1 comment: