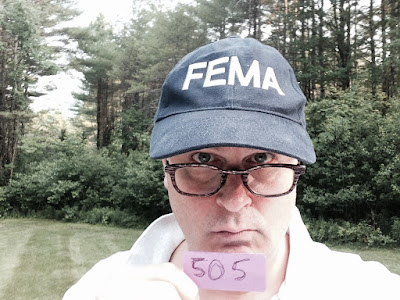 Posted by Adam Tschorn at 7:05 PM No comments: 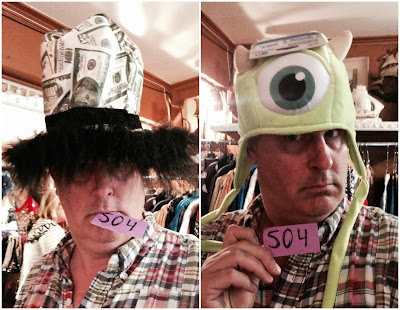 In the run-up to the Fourth of July weekend -- and no longer hobbled by the one-hat-a-day rule -- I decided to post two recent finds.

The one on the left is a top hat silhouette with allover U.S. currency print on the (presumably polyester) crown and a black faux fur brim. (Maker unknown but I think  it's from Elope.)

The one on the right is definitely an Elope lid, described at the fantastical headwear company's website as a "Monsters University" Mike Deluxe Hoodie. It's made of green polyester has two horns, one giant eyeball in the front and two 11-inch tassels.

These were both stealth-snapped at Hidden Treasures Vintage in Topanga Canyon during the goddaughter's whirlwind visit. I don't feel too bad about it though since both the goddaughter and the Bride walked away having made substantial purchases.

This isn't the first time one of the hats from Hidden Treasures' deep bench of headgear has been featured, either, by the way. PC 13 (way back in June 2013) was purchased there -- and photographed in the parking lot as I left.


Q: OK, fun hat but what is Project Cubbins, exactly?


While headgear is no longer posted on a daily basis, the occasional cap, hat or bonnet – if deemed worthy and non-duplicative – is sported here for the amusement of all.
Posted by Adam Tschorn at 10:24 AM No comments: