Baseball-style cap in black and red buffalo check flannel with black and white embroidery of a face on the front and Velcro closure in the back upon which a black, white and red embroidered logo label reads: "Smoke's Poutinerie." 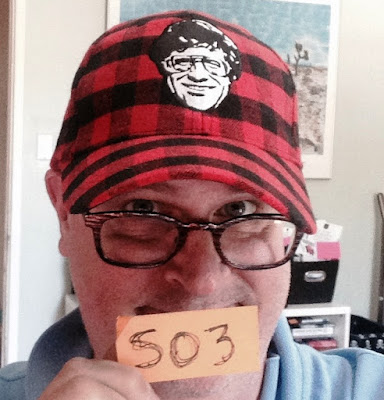 This mystery lid was left, sometime in the last three weeks, at my desk in the Baja Features Cube Farm. There was no accompanying note or explanation of any kind and, to date, no one has mentioned it, but my guess is it came from one of my compatriots in the Food section.

It took a surprisingly little amount of sleuthing the interwebs to determine that this cap must have arrived at the offices as part of the marketing campaign to announce the opening of, you guessed it, a poutinerie, right here in the City of Angels.

Smoke's Poutinerie to be precise, which opened at 1552 N. Cahuenga Blvd. in Hollywood on June 17, making it the second California location behind an outpost in Berkeley.

I have to say that, despite having spent my formative years within curling distance of the Canadian border -- not to mention being what some might consider an overly zealous gastronaut -- I don't think I've actually ever eaten poutine proper.

Poutine, for those unfamiliar with the dish, is one of Canada's contributions to the culinary canon, essentially a pile of French fries ladled to near-drowning with a brown gravy and topped with cheese curds. According to the currently accepted creation myth, It hails from rural Quebec in particular, and the name may or may not be derived from the word "pudding."

In my defense, I've snarfed down many  aplat of fries and gravy in my day -- most memorably at Nectar's in Burlington, Vermont, in my college years -- but to the best of my recollection they've never been topped with cheese curds. (Not that it's be a deal-breaker or anything.)

Oh, and just in case you're wondering (since I was) that embroidered visage above the visor of the hat is apparently the guy they call Smoke.


Project Cubbins started as one man’s attempt to pay homage to Dr. Seuss and his second book, "The 500 Hats of Bartholemew Cubbins," during its 75th anniversary year in 2013. It documented the wearing of a different hat or piece of headgear every day for 500 consecutive days with no do-aheads, no banking of hats and no retroactive entries. Hat One was posted on May 27, 2013, and Hat 500 was posted on October 8, 2014.

While headgear is no longer posted on a daily basis, the occasional cap, hat or bonnet – if deemed worthy and non-duplicative – is sported here for the amusement of all.
Posted by Adam Tschorn at 1:22 PM No comments: