A Remembrance of Pranks Past 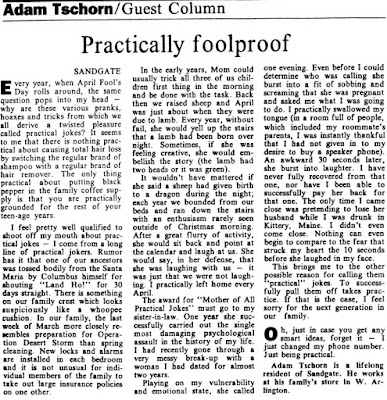 I don't "do" April Fools' Day pranks any more -- for a variety of reasons -- one of them being that, as Penn Jillette (of Penn & Teller fame) told me during an April 1st visit to his prison-themed home on the outskirts of Las Vegas for a 2004 Los Angeles Times story: "It's for amateurs."

But I recently ran across a guest column I had penned for my hometown newspaper (I'm not sure of the exact year, but my best guess is 1993), and thought it would be a good way to fondly look back at my pranking past. And don't worry about the tiny type -- you can click on it to make it larger.)

Some things never change, and I fully expect at least one family member back east to try something.

"Practically foolproof," was originally published in the Bennington Banner, April 1, 1993.
Posted by Adam Tschorn at 9:52 AM