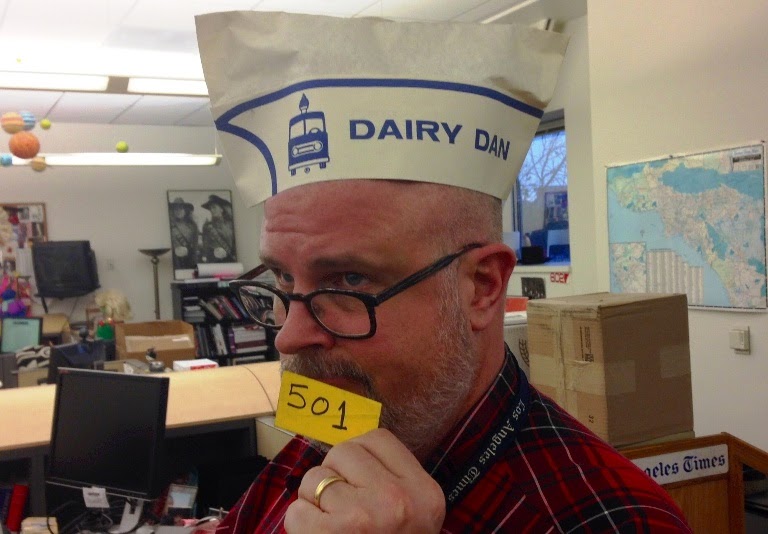 Vintage white paper ice-cream vendor's hat with blue printing that reads: "Dairy Dan" to the left of a stylized ice cream truck with a soft-serve cone on the roof. Interior printing reads: "U.S. Pat. No. 2,685,090 Other Pats. Pending, Made and Printed in U.S.A., Cellucap Mfg. Co. , Phila., PA" and includes a "This hat belongs to: ____________" line and sizing instructions.

I've been carrying that folded yellow Post-It with the number 501 on it since the day I closed out the official 500-hat run of Project Cubbins back on October 8, 2014. To say a lot has happened since then is an understatement of near biblical proportions, but I knew, deep in my heart of hearts I hadn't snapped my last hat.

So, when Noelle Carter -- one of the earliest and most enthusiastic contributors to the Project --waved this cap at me like a red cape at a bull, I felt it was time. Of its provenance she says: "I got it at a second-hand store two years ago and it wished I'd had it while you were doing your project but I just found it today while I was moving desks."

What was Dairy Dan? My cursory search of the interwebs finds a couple of ice cream shops in the Midwest that go by the name Dairy Dan but based on the truck picture on the hat -- and a passage I found in the 2012 obituary of one Alvin "Buddy" Rothstein -- I believe I found the answer:

"Following military service, Buddy married Olyphant native, Beulah Spitz, and moved to York, where he operated a soda bottling plant. After 13 years, he sold the plant and returned to Wilkes-Barre to found Dairy Dan, one of the first soft ice cream truck franchisors."

A sincere hat-tip to Noelle for throwing this hat in the ring. I can;t help but think a deserving number 502 is right around the corner.