New TSA Rules Result in Banning Half of Each Passenger 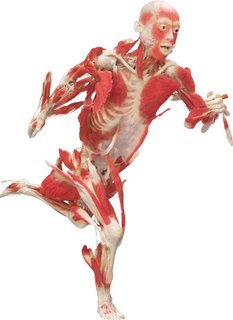 The TSA's new rules that prohibit bringing liquids on board commercial airline flights has had the unintended result of banning most of each passenger.
"It has come to our attention that the average human body is 50 to 65 percent water," said Director of Homeland Security Michael Chertoff. "That's roughly 45 quarts of contraband."
According to the Boston Globe, men are more watery than women (60 to 65 percent water as opposed to 50 to 60 percent) while infants top out at around 70 percent. "That practically makes them little dirty bombs," Chertoff said in a recent meeting with officials at LAX.
Since human blood is 83 percent water, bones are 22 percent water and muscle is 75 percent water, Chertoff said he didn't think there was any efficient way - short of cremation - to separate the liquids from the solids. "And if we do that, the terrorists really have won."
Gunther von Hagens, the German anatomist and creator of the Body Worlds exhibit has offered his plastination process -- which replaces all water in the human body with silicone -- free of charge. "This will render the passenger completely liquid-free," von Hagens told the Riff. "But still completely life like."
Posted by Adam Tschorn at 9:43 AM