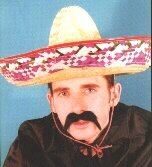 MALIBU, Calif.--A group calling itself the Malibu Residents for Affordable Landscaping held a protest here last week in response to a report that characterized the Mexican gardener -- considered a linchpin of the 'Bu aesthetic -- as a nearly extinct creature that required designation as an endangered species.
"They'll have to pry our gardeners' cold, dead hands from their long-handled rakes," said Chauncey Billups a Hollywood extra protesting on behalf of longtime Malibu Colony resident actor Michael Rappaport. When the crowd of 20 mostly unemployed Hollywood grips, gameshow writers and seat-fillers was informed that it was actually a Mexican garter snake that was endangered and not the immigrant workforce, they immediately dropped their picket signs and headed to a nearby Coffee Bean & Tea Leaf for a round of hard-earned Ice Blendeds.
Posted by Adam Tschorn at 9:47 PM