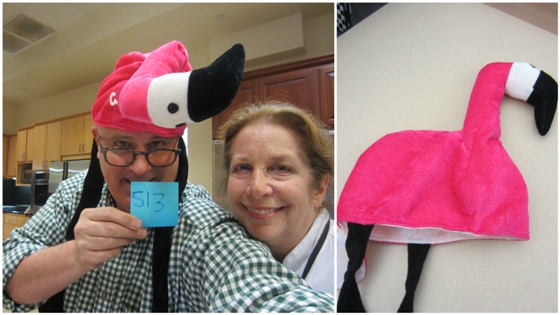 This hat was at the very bottom of a large bag 'o hats that swooped into my cubicle less than five minutes ago in the hands of the Times' Test Kitchen Director Noelle Carter and Recipe Tester Davis Alexander. Davis (pictured with me in the above left photo).

Davis had just given them to Noelle (well-known around the office as a headgear enthusiast) and says of their provenance: "They belonged to my mother -- the late Alice Blue Nadler." Alexander went on to explain that her mother, who passed away three weeks ago at the age of 88, simply loved to buy the fantastical hats. As the two walked away from my desk, I heard Alexander say: "It's so nice to spread her joy" -- and I vigorously nod my flamingo-topped head in agreement.

What really gets my heart cockles toasty warm is that this serendipitous hat came into my temporary custody on the very sane day my own mother is celebrating her birthday -- and that my mom and I have had a long-running mutual bemusement with all things pink flamingo that began decades ago with the gifting of a plastic and wire yard-ornament version.

My mom is fond of saying "you don't take the journey -- the journey takes you," and, in this case I didn't choose my Monday millinery -- and Happy Birthday -- blog post as much at seems to have chosen me.

A Happy Birthday to my sainted mother Nancy Tschorn and a sincere tip o' the hat to the late great Alice Blue Nadler - with the assist to Davis.

A: Project Cubbins started as one man’s attempt to pay homage to Dr. Seuss and his second book, "The 500 Hats of Bartholemew Cubbins," during its 75th anniversary year in 2013. It documented the wearing of a different hat or piece of headgear every day for 500 consecutive days with no do-aheads, no banking of hats and no retroactive entries. Hat One was posted on May 27, 2013, and Hat 500 was posted on October 8, 2014.
While headgear is no longer posted on a daily basis, the occasional cap, hat or bonnet – if deemed worthy and non-duplicative – is sported here for the amusement of all.
Posted by Adam Tschorn at 1:18 PM