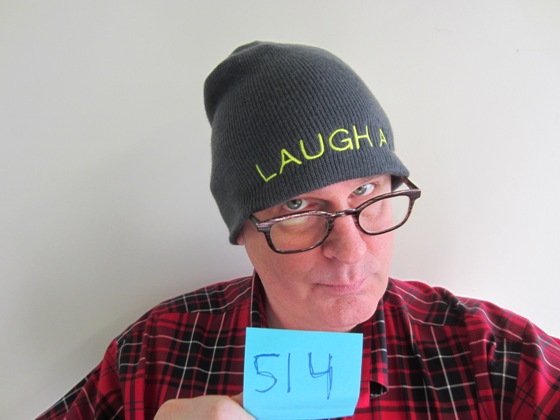 I like knit caps and I cannot lie ... What's probably the last lid of 2015 is a gray, 100% acrylic, made-in-China knit cap with all-caps embroidery that reads (nay, commands) "LAUGH A LOT."

This pate-warming cap, which was in the "elf bag" my sainted mother gave me this Christmas, (other items included a pink flamingo dish and matching cheese knife and a vintage GEM single-edge razor), also happens to be heart-warming.

That's because it's one of the toques in Kmart's Giving Hat program, which donates $1 from the sale of each $5 cap to St. Jude Children's Research Hospital. Other embroidered messages (all of them inspired by St Jude patients and their families) include: "SMILE" and "GIVE THANKS."

According to Kmart's website -- where the hats are still available for purchase (hint, hint) --  the retailer is donating $1 for each hat sold between November 8 and December 31 with a minimum donation of $50,000.

I'm smiling, giving thanks and laughing a lot since the only thing I like better than a hat is a hat with a charitable element to it.

A sincere tip o' the hat to my mother -- unless she wasn't joking and really did use that vintage razor on her legs before gifting it to me.

A: Project Cubbins started as one man’s attempt to pay homage to Dr. Seuss and his second book, "The 500 Hats of Bartholemew Cubbins," during its 75th anniversary year in 2013. It documented the wearing of a different hat or piece of headgear every day for 500 consecutive days with no do-aheads, no banking of hats and no retroactive entries. Hat One was posted on May 27, 2013, and Hat 500 was posted on October 8, 2014.
While headgear is no longer posted on a daily basis, the occasional cap, hat or bonnet – if deemed worthy and non-duplicative – is sported here for the amusement of all.
Posted by Adam Tschorn at 2:47 PM