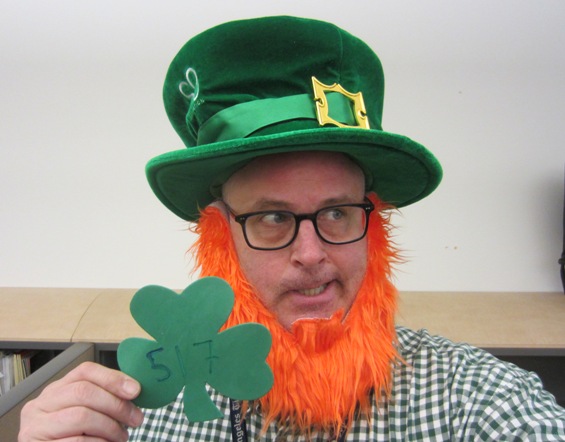 Green polyurethane foam leprechaun hat by Elope Inc., with orange polyester beard also from Elope. Both were manufactured in China.

This seasonally appropriate hat was left anonymously in my office cubicle some months ago along with a press release describing it as a "Lepre-Con 2016 Instant Leprechaun Makeover Kit." As far as I can figure, the gear - and the press release - were aimed at drumming up participation for a February 13, 2016, Las Vegas event billed as the World's Largest Leprechaun Gathering. (As opposed to say, a gathering of the world's largest leprechauns, a conclave to which I in my finery might be better suited.)

I can't resist the opportunity to share my favorite and corniest (or perhaps corned-beefiest) Irish joke:

Q: Who is the first Irishman out in the Spring?
A: Patty O'Furniture.

Groan as you will. I didn't promise it'd be highbrow. A tip o' the leprechaun lid to the good doctor for the shamrock which ended up being today's number card.

Thanks for the guide. this information help me my store online medicine website How to seo.
To get more informationbuy generic viagra online from buy medication online.