So Now We Know It's Actually Pronounced "Melibu" 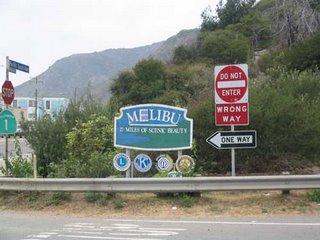 Mel Gibson's DUI arrest early Friday morning, chronicled in depth by TMZ.com, revealed that the coastal enclave of Malibu, Calif., is actually the personal property of the "Braveheart" director.
The "Tequila Sunrise" actor was stopped early in the morning for speeding through Malibu with a bottle of tequila in the car and a BAC of .12. In short, the star of "Man Without a Face" was faced.
In his report, arresting officer, L.A. County Sheriff's Deputy James Mee smelled alcohol in the car state, in part, "Gibson almost continually [sic] threatened me saying he 'owns Malibu' and will spend all of his money to 'get even' with me." He also said the "Chicken Run" voice-over star attempted to flee back to his car during the arrest.
We eagerly await a settlement between the deputy and the "Payback" star, most likely in the form of a bio-pic of the officer (we can only hope for something along the lines of "Stand By Mee").
Posted by Adam Tschorn at 10:43 AM

Ha! Mel thinks Malibu is his personal Hamlet. He really needs to cool it in what is truly a Year of Living Dangerously. I mean, I think we know there is no more Lethal Weapon than a personal bottle of tequila!

Whoops. Used the wrong web address for me. Just in case you were worried it was some other random "Cathleen" that that site directs you to, it is me. This is the correct one.

Mel Gibson knows what I want... because he knows What Women Want.