In honor of millinery Monday, I present to you a black, baseball-style cap in a poly/wool blend with 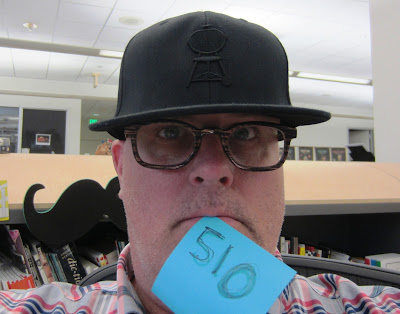 flat brim and black embroidery on front of a Weber kettle grill in silhouette.

Additional details include a rectangular plastic Weber logo on back with the name in white and the grill silhouette in red), interior band that reads "Flexfit" and manufacturer's tag that reads: "Myrtle Beach Headgear."

This hat was purchased at the Weber Original Store Berlin & Grillakademie Original during a trip the Bride and I took to Germany back in September. It was sitting at the counter and advertised as a marathon special -- seeing as the Berlin Marathon was taking place a few days later.

The best  could understand, it's the first-ever Weber standalone concept store anywhere, selling a range of grills and grill tools alongside a kick-ass (indoor!) grilling school that teaches you how to grill and then feeds you the results.

I admit, it was totally an impulse purchase (I think I was probably just smitten with the giant, two-story-tall Weber grill standing outside), but what's not to like about a dedicated grilling lid? And it does go perfectly with Little Carbon Black, the Weber Genesis E-310 parked in our backyard.

A: Project Cubbins started as one man’s attempt to pay homage to Dr. Seuss and his second book, "The 500 Hats of Bartholemew Cubbins," during its 75th anniversary year in 2013. It documented the wearing of a different hat or piece of headgear every day for 500 consecutive days with no do-aheads, no banking of hats and no retroactive entries. Hat One was posted on May 27, 2013, and Hat 500 was posted on October 8, 2014.
While headgear is no longer posted on a daily basis, the occasional cap, hat or bonnet – if deemed worthy and non-duplicative – is sported here for the amusement of all.
Posted by Adam Tschorn at 1:28 PM