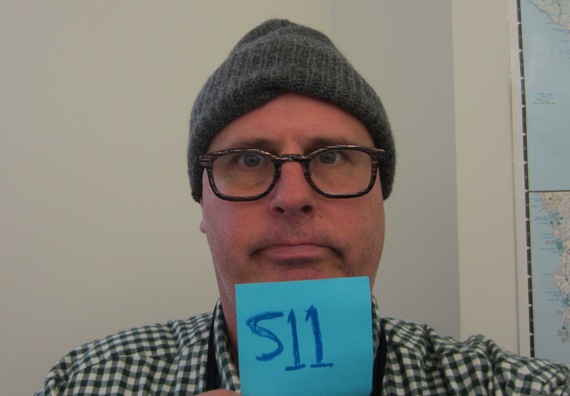 This blustery Millinery Monday finds my noggin sporting a super-soft gray knit cap. Interior tag includes a ribbon-like stripe with the stylized "OK" logo and a manufacture tag that reads: "100% Baby Alpaca, made in Peru" (both in English and French).

The hat is from the debut collection of a super-luxe line called Outerknown that launched this summer, and while I'm quick to mock the knit cap and all those who wear them (especially in beastly hot weather) in today's cool and unusually windy weather, I feel like I'm wearing a security blanket on my head - in the best possible way.

A: Project Cubbins started as one man’s attempt to pay homage to Dr. Seuss and his second book, "The 500 Hats of Bartholemew Cubbins," during its 75th anniversary year in 2013. It documented the wearing of a different hat or piece of headgear every day for 500 consecutive days with no do-aheads, no banking of hats and no retroactive entries. Hat One was posted on May 27, 2013, and Hat 500 was posted on October 8, 2014.
While headgear is no longer posted on a daily basis, the occasional cap, hat or bonnet – if deemed worthy and non-duplicative – is sported here for the amusement of all.
Posted by Adam Tschorn at 3:18 PM