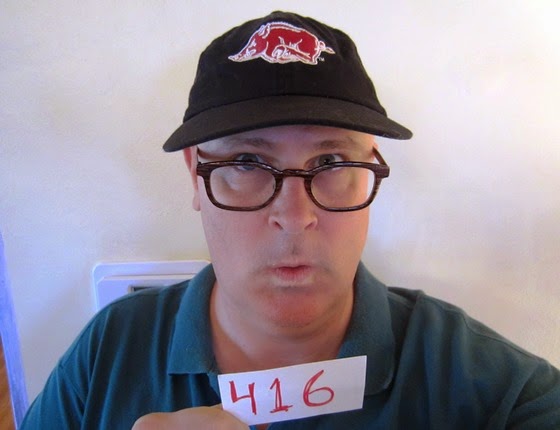 Day 416 / Hat 416: Black baseball-style cap with red and white embroidery of a charging razorback hog om front. Interior rag reads" Cap America, 100% cotton, made in Bangladesh, one size fits all." Graciously loaned to the Project by the Bride.

The ornery oinker on this hat happens to be the mascot of the University of Arkansas sports teams -- the Bride's family has deep ties to the Natural State -- and here's a little color about the choice of a razorback hog:


From 1894, when the football program began, until 1910, the official mascot was the Cardinals to complement the school color of cardinal red. In 1909, according to school lore, the head football coach Hugo Bezdek gave a speech to a large group of students at the Fayetteville train station after returning from a victory over LSU in 1909 during an undefeated season. Coach Bezdek informed the crowd that his team had performed "like a wild band of Razorback hogs." Although students had begun referring to the team as the Razorbacks as early as 1907, Bezdek's statement popularized the use of Razorback for the team. The Razorback, which is characterized by a ridged back and tenacious wild fighting ability, had long been associated with the backwoods of Arkansas.

Apparently the school has a live version of the mascot -- currently a 380-pound Russian boar named Tusk -- as well as a family of uniformed mascots that includes Big Red, Sue E (the female hog) and Pork Chop (a kiddy mascot).

In researching this particular porker, I ran across a recently published post titled "Arkansas Razorbacks mastering their 'Hoganese'" about the coded terminology the University of Arkansas is using on the field.

This little piggy's going to leave it at that.

A: One man's homage to Dr. Seuss and his second book, "The 500 Hats of Bartholemew Cubbins," which celebrated the 75th anniversary of its publication in 2013, Project Cubbins is an attempt to document the wearing of a different hat or piece of headgear every day for 500 consecutive days. No do-aheads, no banking of hats, no retroactive entries. PC started on May 27, 2013 with Hat 1.
Posted by Adam Tschorn at 7:01 PM