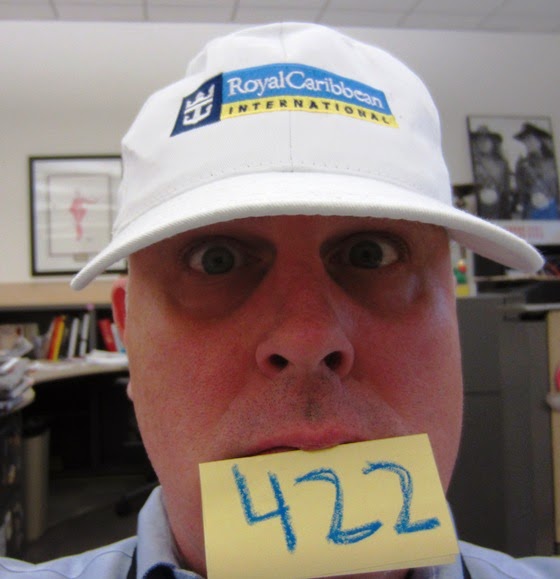 Day 422 / Hat 422: White, baseball-style cap with adjustable, Velcro-closure sizing strap in the back and multi-colored embroidery on front that reads: "Royal Caribbean International" to the right of a white crown and anchor logo against a navy blue background. Interior tag reads: "Style No 4242, 100 % cotton, one size fits all, hand wash only, made in China."

This lid was waiting for me on my desk here in the cube farm this morning, passed along by my travel section compatriots who had no doubt received it from the RCI folks touting some cruise or another.

Here's a little color about that crown and anchor logo specifically -- and the cruise line's adventures in branding generally -- from its website circa early 2012:


"We are launching “The Sea is Calling, Answer it Royally” in the United States today, January 9th. We hope and expect it will be a notable event in our brand’s history. While this is a major change in our communications, please note that we still cherish and express many traditions some of which date back over 40 years. These traditions are not going anywhere. We will discuss the new approach in other entries. Here I want to comment on a few of the traditions.
One of these is our crown and anchor symbol. If anything, we intend for our new marketing communications to draw even more attention to the crown and anchor. It clearly serves a very special role in conveying the quality and heritage of Royal Caribbean International.

As a brief history lesson, it has now been exactly 15 years since we adopted the brand name Royal Caribbean International and the rectangular geometry of our logo. At the time, we hired very prominent (and very expensive!) identity consultants who assisted us in coming up with our rectangular logo. While we did undertake some very subtle tweaks to the crown and anchor, we essentially retained it then as we will retain it now. The consultants were at first puzzled by our affinity for the crown and anchor. They thought it was too masculine and even harsh to be the symbol of a vacation brand. After they completed their interviews of our people and of travel agents, they came back to us and said that they had never encountered such fierce loyalty to a symbol with any previous client.

Those of you whose Royal Caribbean memories go back to the 1970’s will remember that our brand colors were blue, red and white. By the early 1990’s our colors were primarily blue and white. Now they are blue and mustard yellow. That change also occurred 15 years ago. We made the change to make our logo stand out more and to bring the concept of sunshine into our color scheme. These remain our colors going forward although you will also see other vibrant colors in our communications that work with the logo to reinforce both the energy and quality of a Royal Caribbean cruise vacation."

Another tradition referenced in the post is the naming convention that has each ship's name ending in "... of the Seas"  such as Jewel of the Seas, Enchantment of the Seas, and Chicken of the Seas (OK, not that last one -- I threw that in for giggles).

This is Adam of the Silent Ts bidding you "bon voyage" until tomorrow ... anchors aweigh!

Q: OK, nice hat -- but what exactly is Project Cubbins, anyway?
A: One man's homage to Dr. Seuss and his second book, "The 500 Hats of Bartholemew Cubbins," which celebrated the 75th anniversary of its publication in 2013, Project Cubbins is an attempt to document the wearing of a different hat or piece of headgear every day for 500 consecutive days. No do-aheads, no banking of hats, no retroactive entries. PC started on May 27, 2013 with Hat 1.
Posted by Adam Tschorn at 2:30 PM

A notable event in the cruise brand’s history.